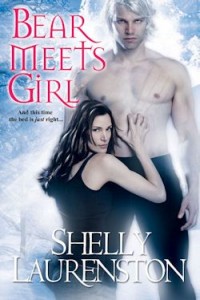 But there appeared to be a little problem with him just leaping from bed and facing the day. And that problem was the naked female sprawled across his chest.

Uncaring about the brutal pain it would cause, Crush opened his eyes and looked down. Yep. That was a female all right. A—he took a sniff—feline female. Crush’s lip curled. Another feline. The most untrustworthy of species in his opinion. And since he was naked, too, he could only assume that they’d…well…you know.

Christ, what was wrong with him? This wasn’t like him. Crush didn’t get drunk and sleep with random people. He just didn’t. It wasn’t in his DNA. It wasn’t just the NYPD who called him “By the Book” Crushek either. He had classmates from junior high, high school, and college who called him that as well.

Yet a little depression, a few too many Jello-O shots to drink at a house party, and here Lou Crushek was. Naked. With a feline.

Who was this female anyway? Anyone he knew? Crush didn’t think so. He knew lots of felines but he didn’t spend time around them because they were, as he’d already stated and everyone knew, totally untrustworthy. It was a fact. Look it up!

Too bad Crush couldn’t be one of those guys who drunkenly slept with a woman only to sneak out before she woke up. It would definitely make his life a whole lot easier but that would bring him to a new level of tacky he couldn’t handle. Just because he felt his life falling apart around him—he hated change!—didn’t mean he’d allow it to actually fall apart. And part of keeping his life together was doing the morally right thing.

Man, it sucked being a good guy all the time.

“Uh…miss?” Jeez! His voice sounded like gravel. He cleared his throat and tried again. “Miss? Excuse me?” He couldn’t see her very clearly with all that black hair, with strands of white and red throughout, covering her face and his chest. He recognized that hair color, though. She was a She-tiger.

Hating to wake her up, Crush tapped her shoulder. “Miss?”

“Uh…yeah, sorry. I…uh…” This was so hard. How did he tell a woman he’d possibly had sex with that he didn’t know her name? Couldn’t even remember having sex with her? This was getting worse and worse. When the hell did he become a frat boy?

Suddenly she stretched, her long body briefly writhing on his. Crush ignored how good that felt and said, “Miss?”

She lifted her head and gold-green eyes blinked up at him.

Damn, she was pretty. He didn’t remember having sex with her? Really? How drunk had he been last night?

She blinked at him in confusion; then she smiled. “Oh. Hi.”

Yawning and slapping her hand against his chest, she levered herself up and looked around the room, giving him a monumental peek at her breasts and, wow, those were freakin’ nice. “What time is it?” she asked.

She nodded and settled back onto his chest, eyes closing, arms tightening around his chest. “Good. I’m still so tired.” Wait. What just happened?

Her head snapped up, those eyes locking on him. “Are you going to keep talking? Cause it’s irritating. I’m trying to sleep, and I’m extremely hungover.”

Crush’s eyes narrowed. He was irritating? “Tell me we didn’t have sex last night.”

“As drunk as you were?” She yawned, already bored with him, it seemed. “I don’t think you could have gotten it up with a crane.”

“Wait. Is that what you think? That we fucked?”

“We’re in bed together. What was I supposed to think?”

“That I was tired and needed some place to sleep.”

“Yeah, I was really drunk, too, so I just took my clothes off.”

“Wasn’t there somewhere else you could have slept?”

“Most of the people who crashed here last night were either full-humans or canines. Have you ever tried to sleep with a canine? They yip in their sleep. And run. It’s annoying. And Mace wouldn’t take the couch so I could sleep with his wife so—”

“You asked a lion male to move out of his bed for you?”

“Why wouldn’t I? Because he’s the majestic lion male, king of the jungle? Or because he’s a rich Llewellyn of the Llewellyn Pride?”

“Because it’s the man’s house.”

“It’s his wife’s house. MacDermot just allows him to stay here with her and those giant, useless dogs she owns. And I know she’d pick those ridiculous rotties over that lion in a hot second.” She sat up. “Well…now I’m awake.”

“How annoying for you.” Crush struggled to sit up, too, ignoring the screaming in his head.

“What are you so cranky about?”

“You basically just told me you used me like a giant pillow.”

“You were comfortable. And didn’t yip once. I hate the yipping. Let me tell ya, you don’t know hell until you’ve been trapped in a rainy, miserable jungle during monsoon season with a bunch of canines. Everyone wet and miserable and goddamn yipping.”

Crush tried to ignore his migraine and asked, “Why would you be sitting in a miserable jungle with canines?”

“For lots of reasons.”

“Name two. No. Just name one. I challenge you.”

“You challenge me?” She laughed, her almost muzzle-like nose crinkling a little as she looked him over. “Aren’t you cute?”

Finally, Crush had to ask, “Who are you?”

“If I wasn’t still hungover, I’d give you my most sultry smile and tell you ‘your dream come to life.’ But eh. I’m just too tired to bother and, honestly, does one have to really put in that much effort for a bear?”

“Are you always this insulting?”

“Insulting? This is me being nice. I even complimented you.”

“Yes. Apparently I’m as comfortable as a pillow.”

“Yeah. But one of those full body ones. Or like one of those giant stuffed bears you get when you’re a kid. My dad used to get me those and then he’d teach me how to maul ’em.”

She held up her finger. “Hold that.” Then the insane female stretched out across his lap and reached down to the floor, grabbing a phone out of her jeans.

Annoyed and disgustingly turned on, Crush snarled, “Woman, get off me.”

“Ssssh,” she said, settling her butt onto his lap. “Business call.”

Did she just shush him? She did, didn’t she?

“Yep?” she said into the phone, clearly uncaring that they were still both naked and there was absolutely nothing separating her ass from his cock? “Now? Cause I gotta get home to the kid.”

Kid? The woman had a child but she was hanging out and getting drunk at house parties, and torturing him with her butt on his cock?

Thinking about all the shitty parents Crush had been forced to deal with over the years as a cop, Crush hissed, “You have a child?”

She nodded and while someone kept talking on the other end of her phone, she whispered, “Have to get home. Still breastfeeding.” Then, when Crush thought his head might explode, she silently laughed and mouthed, “Just kidding.”

Holy hell, who was this woman?

“All right. All right. I’ll get Smith on it. You know she loves morning jobs. I know she doesn’t work for you, but think of it as outsourcing. We both know she can do the damn job. Besides, she has to realize that not everything can be the close-up kill.” Not knowing what she was talking about, Crush was relieved when she winked at him. Good. She was kidding. Because it would be really hard to arrest a naked woman sitting in his lap. “Okay. Good. I’ll take care of it.”

She disconnected the call and tossed the phone back on her jeans. “I’ve gotta go.”

“Yes. You need to get home to your child.”

“Yeah. Her too.” She shrugged. “She’s pretty self-sufficient. She can almost reach the stove.”

Unable to take any more, Crush pushed her off his lap. Not as hard as he’d like—damn his morals—but at least he got her off him and he could move away from her.

Grabbing his clothes, Crush moved to the door.

“Don’t you want my number?” she asked him. “Maybe the next time we could get drunk and then actually have sex. If you’re worried about the kid, I can put a little brandy in her milk bottle and she’ll be out like a light.”

Crush began to speak, but realized he would only say something completely inappropriate and mean, something he simply couldn’t bring himself to do. So instead he stormed out, slamming the door behind him.

Tragically, however, Desiree MacDermott stood there in her hallway, her green eyes growing wide as her gaze moved down the length of his naked body while he lollygagged in the middle of her hallway.

His fellow detective finally looked up into his face. “Hi, uh…Crushek. How’s it going?”

“Fine. Thank you for inviting me to your party.”

“Okay.” They stood in the hallway another second, then Crush said, “Bye.”

And, with as much dignity as he could muster at six in the morning while naked in a co-worker’s house, and still sporting a hangover and a semi hard-on—because even degenerates could be sexy as hell in the morning—Crush headed to his truck and absolute freedom.

Marcella “Bare Knuckles” Malone—She-tiger, feline nation protection agent for KZS, pro hockey player for the championship shifter team the Carnivores, and the Malone family’s bare knuckles fighting champion—heard the bedroom door open again but she simply couldn’t stop her hysterical, wheezing laughter. No one could! Why? Because that had been the best!

She heard MacDermot but Cella couldn’t answer her. She was too busy laughing and trying to figure out who that guy was? It wasn’t every day Cella got to meet guys who looked like biker gang meth dealers but had the moral fortitude of Martin Luther. All that indignant outrage over her untended daughter while sporting long, white polar bear hair that reached past his shoulders, a perpetual scowl, a scar on his neck, and pitch black eyes that probably terrified lots of people. Of course, if all that didn’t scare someone, she was pretty sure that what had to be about six feet and nine inches and about three hundred pounds or so of hard muscle probably did the trick. Man, had that body been like a thousand levels of perfect or what?

Yet even though the guy was really scary looking, Cella just found all that intimidating scowling and raging-anger made him so cute. Like teddy bear cute. Plus he was so damn uptight! She didn’t know bears could be so uptight. Unless they were startled into a rage, bears were usually the most laidback of all shifters, except lion males. Although Cella felt there was a huge difference between laidback and just plain lazy.

Even worse for that poor bear was how all that uptightness brought out Cella’s worst feline qualities. Honestly, the more uptight the bear became, the more she playfully swatted at him. She couldn’t help herself. He was just so cute in his moral outrage!

“Cella!” MacDermot demanded, also now laughing. “What the hell did you do to the poor guy? I’ve never seen him look like that before. He was about to blow a vein in that big bear head of his!”

More than she could take, Cella rolled off the bed, hitting the floor, which miraculously made her hangover go far, far away.