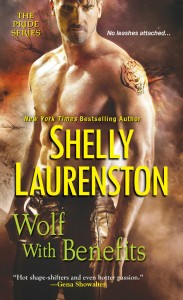 Gwen O’Neill reached over and grabbed Blayne, yanking her close so that she didn’t get hit with their leopard teammate who’d just been tossed off the track like so much trash.

“I thought the little bitch was just full of bullshit. You know, all talk. But she is as mean as a snake.”

“Cruel? Babe, the Marquis de Sade was cruel. This chick is a class-A cunt. I think she’d cut her own mother if the woman got in her way.”

“I still don’t know what you see in that man, but I do admire his focus.”

A big arm slipped around Gwen’s waist and a nose nuzzled the back of her neck.

Smiling, she turned and leaped into the arms of her mate and fiancé.

Lock MacRyrie hugged Gwen and kissed her. She knew he’d come right from his workshop because she could smell the different types of wood he’d worked with that day. Lock had been able to work full-time on his woodworking business for about a year. It had been a scary transition for him. He liked the security of his software business, but he hated the work. Now he did what he loved and he was like a different bear. Gwen loved seeing him happy, although his desire to up the budget on their wedding was setting her teeth on edge. She knew what was motivating him, too. Not only the extra money he was bringing in from his business, but his uncles, who were goading him into making “the biggest MacRyrie wedding ever!” Something she’d been trying to avoid. Desperately.

Luckily, it was going to be a double wedding with Blayne and Bo, and the one thing Gwen was starting to use to her advantage was that Lock’s uncles didn’t want to go near Bo Novikov. Very few people with sense did.

And Blayne was known to be rather sense-free.

“How did it go today?” Gwen asked once Lock put her back on the ground.

“Pretty good. Sold that marble and wood dining table.” Her eyes narrowed and he quickly added, “For the amount you suggested. I promise. I didn’t give any discounts.”

“They either made you mad or they were full-human.”

“I think I was wrong about Cherise,” Blayne said, rolling over so that she could give Lock a welcoming hug.

“The mouse?” Gwen asked. “I’m surprised she’s not under the bleachers.”

Gwen glanced at Blayne and then at Lock. “We have no idea what you’re talking about.”

Not bothering to explain, Lock pulled out one of those plastic bottles of honey. The ones shaped like a teddy bear.

“So how much longer?” he asked, motioning to the tryouts.

“Another forty minutes. That okay?”

“Sure.” He opened his mouth, tilted his head back, and squeezed an ungodly amount of honey into his throat.

By the time he was done, Kowalski had skated over to them.

“So,” Gwen said to the freaky little unnamed shifter. “You in or out?” She didn’t bother with niceties with this woman. She didn’t know why, but she didn’t see the point.

“I don’t know. Maybe. I am feeling less aggressive at the moment, which is usually a good thing.” She suddenly faced Lock, and Gwen watched the bitch stare up at her fiancé. Gwen cracked her knuckles and Blayne skated in front of her, briefly stopping Gwen from house-catting the boyfriend-stealing whore’s face.

“Can I have some of that?” Kowalski asked Lock. She sounded almost polite.

“This?” Lock held up the bottle of honey.

When the female nodded, he handed the bottle over and she did what he’d done. Leaned her head back, opened her mouth, and poured an ungodly amount of honey into her throat. When she was done, she handed the now-nearly empty bottle of honey back to Lock.

With that, Kowalski skated back to the track.

Gwen and Blayne moved closer to Lock, each of them on either side of the grizzly.

Lock looked back and forth between the women. “She’s not a bear.”

“You guys really don’t know what she is?”

“It’s been driving me nuts!” Blayne continued to whisper loudly. “I’ve been around her for days and I can’t figure it out.” She began to bounce up and down on her quads. “Please tell me, Lock! Please!”

Gwen rolled her eyes. “So now you’re just making shit up? Just admit she did that whole honey thing to flirt with you.”

“That woman doesn’t flirt. She wasn’t flirting. She wanted the honey. She starts off nice because I have something she wants. But trust me . . . if I’d said no, she’d have ripped it out of my hands, possibly taking a few fingers with her. Her claws are longer than yours.”

“These are not claws.” Gwen held up her expertly done nails. “These are a fashion statement.”

“They’re unbelievably private. I mean, you think we’re private with the government, but they’re private with everybody. Of course, that could have a lot to do with them being thieves.”

He chuckled. “Foxes are like kids going into a bodega and stealing candy bars. Honey badgers steal real shit.”

Gwen watched Kowalski smash her fist into the face of a six-nine grizzly female. There was no fear in her expression. Just some hidden rage that Gwen didn’t even want to think about. “She does seem mean enough.”

“The meanest animals and shifters in the world,” Lock said. “I realized that when I joined the Marines.”

“You know those military guys who say very little but they’re always standing right off to the side of what’s about to explode into a problem? They’re usually short, powerful looking . . . and smirking. Then when shit does explode, usually in a bar right outside the base, they’re the first ones in the middle of it all, kicking ass and ending up in the brig for doing the worst damage although they always look the least harmed? Yeah . . . those are honey badgers. And the females are definitely worse.”

Blayne happily clapped her hands together. “That’s so—”

“Shut up, Blayne,” Gwen snapped before the word “cool” could come out of her mouth.

Blayne immediately calmed down and they continued to watch the tryouts. Cherise had disappeared for a while, but she came back out at some point and got on the track. Appearing typically terrified.

“We should get her out of there,” Gwen suggested.

“I was thinking the same thing.” Blayne started to skate out when Kowalski cut in front of her. Blayne squealed at the sight of the dangerous female and quickly skated back to Gwen’s side.

“You want me to handle Cherise?” the female asked, appearing unfazed by Blayne’s hysterical response.

“You don’t have to kill her,” Blayne said, panic in her voice.

Kowalski rolled her eyes and headed out to the track. She stopped by Cherise’s side and whispered something. When she was done, Kowalski returned to them.

The first whistle blew and Cherise, and another girl trying out for the jammer position shot off. A second whistle sounded and the rest of the pack went after the two females. Whichever jammer got out in front first would earn points by passing the girls on the other team. It sounded easy, but trying to bypass a seven-two She-bear with mommy issues was easy for no one.

It was entertaining in a really horrifying way.

“What did you say to her?” Gwen asked Kowalski.

The female shrugged. “She’s got a thing about germs. I just pointed out that no one trying out today had bothered to wash their hands in the last two hours, not even the ones who went to the bathroom. She’s a canine who runs on fear. You just have to find ways to use that fear to your benefit.”

Appalled, Blayne said, “But you’re like family with her.”

“Yeah. That’s why I know how to manipulate her. That’s what family does to each other.”

And that made Gwen laugh—because the honey badger was right.