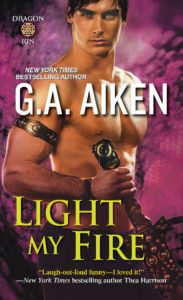 Elina lifted her bow, aimed. But when she let the arrow loose, it was inches off. A difference between a clean, quick kill and just pissing her prey off—something that she preferred not to do.

“Are you always this hard on yourself?” the dragon asked. Yes. The helpful one-eyed man with hair the color of steel turned out to be another dragon. The Southlands seemed to be riddled with them. Like decadence.

Not that Elina minded. The dragons were friendly enough. And this dragon was being more than helpful. Plus, she knew his help wasn’t out of pity. He just understood what she was going through and was trying to help.

“Yes,” Elina replied to his question. “I am always hard on myself.”

“Don’t be. You’ll be able to adjust, it’ll just take some time.”

He stood behind Elina and gently turned her shoulders. “Your dominant eye may be gone, but you can train the eye that you have left to fill that spot. But you’ll need to do things a little differently. For instance, you’ll need to adjust your sights when you’re aiming and—”

“There you two are! I’ve been looking just everywhere for you!”

The beautiful red-head rushed up to them, her grin wide and eager.

Keita narrowed blue eyes at the Dragon. “Was that really necessary, Curled Horns?”

His grin did not falter. “It felt necessary and good. Now, if you don’t mind, I’d like to get back to working with Elina Shestakova of the—”

“Do not bore me with that ridiculously long name yet again!” the royal roared. Then, just as quickly, her rage turned into the sweetest smile Elina had ever seen, which did nothing but make Elina reach for another arrow and step back from her.

“In light of your recent tragedy—”

“If it is such tragedy, why do you smile at me like viper you were named for?”

“Quiet,” she snapped at Gaius Domitus, before turning her focus back on Elina. “I smile because I have a wonderful gift for you.”

She crouched down in the beautiful gown she wore and spread out a silk cloth. On top of the cloth, she laid down several other pieces of cloth in varying colors and designs.

“What is that?” Elina asked.

“An array of eye patches! In festive colors and styles! Perfect for an on-the-go Daughter of the Steppes such as yourself.”

Elina looked over at Gaius Domitus and he immediately replied, “Yes. She’s quite serious.”

Putting the arrow she held back in her quiver, Elina reached down and grabbed hold of a simple black eye patch.

“Not that one,” the royal snapped, slapping Elina’s hand.

Elina dropped the eye patch and reached for another arrow, but Gaius caught hold of her wrist. “No.”

“No. Believe it or not, she’s favored amongst her dragon kin. Killing her will win you no friends.”

The dragon gave the smallest tilt of his head, gesturing to the royal. With a disgusted eye roll and sigh—because she knew exactly what he was suggesting for her to do—Elina said, “Why do you not pick one for me, Princess.”

“Oh!” she trilled like an annoying bird Elina wanted to beat to death with a tiny battering ram. “What a lovely idea! Now let’s see? You know, there’s just so many choices that you have with your skin color and hair. You are such a lucky girl!”

Gaius snorted and quickly glanced away but if the royal noticed, she didn’t mention it. Instead, she finally picked a bright blue one. “Here! This will go perfectly with the eye you still have in your head!”

The royal stood and quickly removed the bandages that had been around Elina’s head. She tsk’d a bit. “Will these scars fade with time? You should talk to Morfyd. I’m sure she can help with that.”

“All right, all right! No need to get snappy!”

She carefully placed the eye patch on Elina, stopping several times to adjust it, before she stood back, her hands clasped together. “That’s perfect! Absolutely adorable!”

“Yes. Because that is what Daughters of Steppes strive for—adorableness.”

Gaius lowered his head and began to scrub his face with his hands, but Elina sensed it was only to hide his laughter.

“Ho, sister!” Elina heard Kachka call out. “Look at what I have gotten us for dinner!”

Elina moved around Gaius and watched her sister dragging the oxen she’d taken down with one shot, the arrow still buried in its neck, blood still pouring.

Her sister’s smile was wide and huge until she saw Elina, then she stopped, frowned. “What is that on your face?”

“They didn’t have black one?”

“They did, but she would not let me wear it.”

“Why,” the red-head wanted to know, “would you condemn yourself to a black eye patch when I have an array of festive colors and styles?”

Elina looked at her sister. “She has an array.”

“You look like peacock. It is like annoying jewel. It makes my eyes hurt to stare at.” She studied Gaius. “Who is this?”

“Gaius Domitus from the Western Mountains. Handsome, is he not? And no wife has taken him.”

“This is my sister, Kachka. She helped save me before I could lose other eye.”

Kachka walked around Gaius Domitus, examining him from all sides. “Very nice. Sturdy thighs. I like his steel-colored hair.”

“Gods damnit!” Kachka snarled. “Is that all they have here?”

“Wait, wait,” Gaius cut in, his grin mischievous. “Before we go any further. I must make introductions. Keita, this is Kachka Shestakova of the—”

“Do not”—the She-dragon roared, startling the birds from trees and the men training nearby—“again bore me with those ridiculously long names!”

She picked up her array of eye patches. “Keep that on,” she ordered Elina. “I will help you choose one for tonight when you have gotten rid of this iron menace!”

“Why do I need to choose another for tonight?”

She immediately calmed down and grinned. “There’s a feast tonight! There’ll be dancing.”

“A feast?” Kachka asked. “Who are we sacrificing?”

“What is there to celebrate?”

“Stop asking me your ridiculous questions, foolish female!” the She-dragon snapped. “I have no time for this!”

The She-dragon lifted her skirt and stormed away.

“She is royal?” Kachka asked Gaius.

“Where are her shoes? Why does she have no shoes?”

“She makes me uneasy. Avoid her sister. Her madness could probably be spread like the sickness that took our cousin a few years back.” Kachka grabbed hold of her rope. “I will take my offering to a field and butcher it for this feast these decadent royals will be having.”

“Or,” Gaius quickly suggested, “you can give your prize ox to someone in the kitchens.”

Gaius briefly closed his eye before focusing on a young child running by. “Squire? You there.” The child ran to Gaius. “Take Lady Kachka to the kitchens so she can give her oxen to the head cook.”

Kachka looked Gaius Domitus over before shaking her head. “Such a waste.”

“Thank you,” he said good naturedly. “I think you’re adorable, too.”

Elina stepped between the pair before Kachka could attempt to remove the dragon’s spleen for such an insult. “Sister. We are guests. Do not forget.”

“You must not pick on her,” Elina warned as they watched Kachka drag her still bleeding offering up the stone steps of the castle and into the Great Hall. “She is not like me. She has…short temper.”

“I’ll make sure to keep that in mind,” Gaius Domitus said, still smiling. “Now, would you like to get back to work?”

Celyn looked up from the discussion he was having with his father to see Kachka being led into the hall by one of the squires. Behind her, she dragged an enormous oxen. He wondered if Kachka had anything to do with the Keita flounce that had happened just a few minutes before. She’d been in high dudgeon and no one had bothered her as she’d flounced her way up the stairs.

Staring at the trail of blood that Kachka’s oxen left behind, he heard his father say, “You have no idea how proud I am of you, son.”

Startled, Celyn immediately forgot about the blood and focused on his father. “Proud? She came back missing an eye.”

“She came back. From what I know of the Riders that is a remarkable feat. But it’s not only that, I’m also impressed with how you handled the Costentyn tragedy and the information you provided about Brigida. And, gods, Costentyn’s journals. I can’t thank you enough for grabbing those.”

“I’m glad the journals were helpful, but we still don’t know where Brigida is.”

“Let’s not dwell on that right now since I’m sure whatever she’s doing would disturb us both greatly.” Bram placed his hand on Celyn’s forearm. “But what I am saying is that you did a very impressive job.”

“If it had been any of your other brothers and sisters or your Uncle Bercelak, they would have started a war. If it had been your mother, she would have wiped the Riders from the Steppes and left that area open to Priestess Abertha and the zealots of Annaig Valley. I know now that sending you, Celyn, was the best decision that could have been made.”

“So you don’t think I ask too many questions”

“Of course you ask too many questions. You can’t help yourself. It’s in your blood.”

“You take after your grandfather. Ailean constantly asked questions. Like he was shooting one arrow after another. However, unlike him, you actually expect a response. And wait for one. That’s how you make that talent your own.”

Brannie came in from the back and sat on the table, her legs immediately beginning to kick Celyn’s chair. Something he’d always found annoying.

“Looks like we won’t have to challenge Annwyl again if she decides to go off and kill Elina’s mum.”

“Éibhear’s Mì-runach friends are here. Their whole purpose is to run head-long into inevitable death. They can handle Annwyl.”

“You do remember that Éibhear is your cousin?” Bram asked.

Brannie grabbed a fruit from a bowl on the table, took a bite, shrugged.

Kacha walked toward the Great Hall doors, this time without her oxen. She was covered in blood.

“Oy,” Celyn called out to her. “Do you need a bath? One of the servants can get that for you.”

Kachka stopped, stared at Celyn, her mouth slightly open. “Lakes and streams all around this property and you make your workers fetch water for you so you can clean yourselves?”

Celyn and his sister said together, “Yes.”

Kachka turned toward the servants busy cleaning up the blood she’d left on the floor. “You do not deserve this treatment,” she told them. “Fight your oppressors! Stand up for yourselves!” When the servants only stared at her, Kacha’s lip curled in disgust. “Sheep!” she accused. “All of you are sheep!”