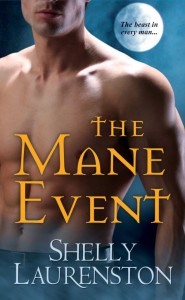 Ronnie smiled at the man sitting in the enormous SUV at the curb, waiting for her aunt.

Ronnie laughed. She’d completely forgotten how entertaining her aunt could be. And her momma had been right. Family was family. Her aunt didn’t blink an eye when Ronnie knocked on her door holding on to a man only wearing a hospital gown. Annie Jo let them in, got Shaw settled, and even handed Ronnie a Christmas present she would have mailed to her after the holidays, like she’d done for fifteen years. True, Annie still had nothing good to say about Ronnie’s mother but that went both ways.

Her aunt even talked about canceling her date but Ronnie had no intention of getting between a wolf and a “proper layin’”. That would be plain wrong.

“What about you and that cat?” One dark brown eyebrow peaked as her aunt smirked at her. “Hhhhmmh?”

“Well I just find it surprising you haven’t called in the Pack yet. Let them take care of Mr. I’m Gorgeous.”

“Why should I ruin their Christmas?” The way hers had been ruined.

“I’ll call them in the morning. I promise.”

Annie headed toward the SUV, Ronnie trailing behind. “You know Ronnie, I really can stay. Help you with that boy. He is a big one.”

“We’ll be fine. Go! Have a great Christmas date. ”

“You have my cell number if you need me.” Annie opened the door and blew a kiss at her date.

“Really?” Annie didn’t sound like she believed that for one second.

Annie’s date leaned down to look at Ronnie through the open passenger door. “Is that your lion?”

Ronnie spun around and watched Brendon Shaw—all seven feet and five hundred pounds of him now that he’d shifted to lion—trot down the nice quiet streets of Long Island, New York.

Laughing, her aunt waved at her. “Have fun, darlin’.”

Ronnie didn’t wait to see her aunt drive off with her date. Instead, she took off running after the big idiot.

Thankfully he wasn’t really trying to get away. Instead he seemed to be just wandering…and romping.

She caught up to him nearly three blocks away, rolling around on some poor person’s lawn.

“Shaw,” she called out softly. He ignored her.

“Brendon!” she tried this time, whispering as loud as she dare, hearing music and the people inside the house laughing and having a wonderful holiday. “Come here!”

Shaw, on his back with big paws in the air, stared at her, his tongue hanging out. Lord, what was he doing?

“You heard me, mister. Come here!”

Scrambling to his feet, Shaw gave a low growl. If he started roaring, she was so screwed. But instead of roaring, he…he…

It was the calypso Christmas music coming from inside the house that set him off. Eyes wide, Ronnie watched the King of the Jungle shimmy his lion ass around on some poor human’s lawn. They’d never understand those paw prints come morning.

Ronnie’s head tilted to the side. Is he…? Yup. He was doing the mambo. Paws crossing over paws. Head bopping to the beat. Thick, regal mane waving in the cold December air. He actually wasn’t too bad. For a big cat doing the mambo.

Rubbing her eyes, Ronnie realized she had to focus.

“Get over here!” she commanded again, still whispering.

Shaw looked up at her, then he lowered his head toward his front paws, his big lion butt in the air.

She hadn’t done one of those since her first couple of years of being able to shift fully when she’d still been a pup. And she’d never heard of cats doing them ever.

Ronnie walked toward him and he literally jumped back away from her.

Keep away. The big idiot wanted to play keep away.

She didn’t have time for this. She had to get his crazy cat ass back in the house before someone saw him.

He watched her, his gold eyes examining her from head to toe. Then his gaze locked on her tits…and stayed there.

Ronnie Lee rolled her eyes. No matter what breed they may be, all males were pigs.

However, she’d learned over the years that males could be controlled. With the right bait.

Looking around to make sure they were still undetected, Ronnie did what she’d promised she would never do again since that Motörhead concert when she was eighteen. She lifted her shirt and bra, flashing him.

Shaw charged her head on and Ronnie barely had time to pull her clothes back into place before she gave a surprised squeal and tore off back to her aunt’s house.