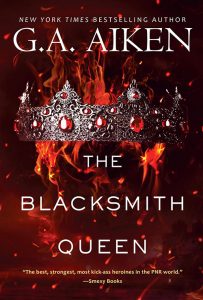 “The women in my mum’s family have been blacksmithing for centuries. We’re born to it. Except my grandmother did not forgive her for marrying outside—”

“Aren’t you forgetting one?”

That was when the Amichai did something strange. For him. He laughed.

“I have never met anyone who has such a dramatic reaction to the handmaidens of a god.”

“We don’t know which god. She hasn’t told anyone. She could be worshipping all sorts of evil.”

“In her all white, with the no touching? That kind of evil?”

“Color means nothing to me.”

“I know. Since eyes of fire don’t seem to bother you.”

“As I tried to explain to your very judgmental sister, animals are not like humans. It doesn’t matter which world—”

She paused briefly to glare at him properly.

“. . . they come from. Animals are animals. And unless they attack or one is hunting them for food and clothing, they should be left alone to live their lives in the wild.”

“And yes, that includes wolves that have eyes of fire.”

“She has no excuse!”

“Are you always this inflexible?”

“Actually,” she admitted, “I’m a very forgiving person.” Keeley rubbed her nose. “But not with her,” she finally admitted.

Tired of being judged, Keeley turned toward the Amichai, and asked, “Why are you here?”

He stared at her but didn’t reply.

“I know you’ve been following me and lurking around the farm. I want to know what’s going on.”

“In case I have to kill you,” Keeley replied with total honesty, “I’d rather not get too attached.”

“Fair enough. But we haven’t been lurking around your farm,” he corrected. “It was more of a sneaking.”

Keeley narrowed her eyes on the Amichai. “You do know I’m carrying my hammer?”

“I like my huge head.” She stopped, realizing how that sounded.

“There are things you and your family need to know. But it should come from my sister.”

“She’s too busy trying to get information out of my sister while my sister does the same thing to her. So I’m asking you. What’s going on?”

Caid looked off and she could tell from the expression on his face he was debating how much shit he’d have to eat when his sister found out he’d told her everything. But before she could push him or he could decide to speak on his own, the gray stallion from the wild herd ambled out of the darkness, moved up behind Caid, and rammed his head into the Amichai’s back.

Caid slowly looked over his shoulder at the horse. “Really?” he demanded.

“He likes me,” she told him. “Always keeps an eye out for me. You probably shouldn’t annoy him.”

Caid stared at her for a long moment, then said, “My sister says you already know I’m not a man.”

“Well, at least half of you is,” she said on a little snort.

“Why didn’t you say anything to the others?”

“Not yet. Especially me mum. She’d probably start hacking at you all with her big cleaver.”

“My mum’s not good with being startled. Or people with hooves.”

“You don’t seem to mind people with hooves.”

Keeley smiled. “Of course not. Your people saved my father’s life. Without your tribe I wouldn’t have siblings. You lot brought him back to me and me mum. He told me everything when I was a little girl. About the Amichais. About the different tribes. About the mountains and how beautiful they are.”

“And he told your mother?”

“Oh, gods, no!” she said on a big laugh. “My mother would have thought he was insane. She already thinks he’s a little insane. Assumes it’s all because of the few times he got his head split open when he was a soldier.”

“He didn’t tell your mother, but he told you?”

“Doesn’t scare at all,” she said quickly. “She can be startled, but she’ll not be scared. Please don’t ever forget that. For your own sake.”

“So are you going to tell me?” she pushed, the stallion now standing behind her and resting his large head on her shoulder. “Why are you and your friends here? What do you want?”

Caid took a few steps toward the lake but he didn’t step in. He simply stared out over it before announcing, “The Old King is dead.”

“I know. That’s why I’ve been making so much money lately. Mercenaries. It’s fabulous.”

“What about the future king?”

She couldn’t help but chuckle. “Why should I care? They’re all bad. They’re all cruel and greedy and I hope the hells welcome them and their royal cohorts when they die, because they’ll not get their due justice on this plain. But I’m not sure what my philosophy on the royals has to do with anything.”

“There has been a prophesy,” he said, turning to face her. “A prophesy about the next ruler.”

“And the prophesy doesn’t call for a king. It calls for a queen. And the witches have named your sister.”

“The nun?” she snarled. Because Keeley would just bet that her nun sister would love that!

“No, no,” he said quickly. “Your other younger sister. Beatrix.”

Caid stared at her for so long, he lost track of time. And it could have continued for much longer except that Keeley finally said, “Is something wrong?”

“I tell you that your sister has been prophesized to be the next queen and your response is, ‘she might like that’?”

“Well, she might. It’s hard to tell with her.” She stepped closer and whispered, “I wouldn’t say she’s shy, but she’s definitely not chatty. She only tells you what she wants to tell you. But,” she added, a little louder, “she does like pretty dresses. And I’m sure she’d have no problem wearing a crown.”

Again, Caid could only stare, because he didn’t know what to make of such a response.

But then something happened. He saw it. On her face. Keeley started to think.

Keeley suddenly paced away from Caid, and the stallion that had been standing behind her sidestepped out of her way. The horse shook his head and let out a snort, which set off the rest of his herd. Some ran away. Some stayed put, but their hooves hit the ground and they snorted their discomfort.

This was the Keeley his sister had been warned about by the witches. The one who would tear the world apart to protect her kin.

“I’ll have to talk to my parents. They’re not going to like this, but they’re not unreasonable.”

“Your sister wasn’t at dinner tonight.”

She stopped pacing, shrugged. “My sister was not in the mood to entertain strangers. No offense.”

“Was that it?” Because Caid understood. He didn’t like entertaining anyone either, much less strangers.

“Because she’s a nun?” Caid asked, only slightly joking.

Keeley did manage to smile. “Shockingly, no. They’ve never gotten along, sadly.”

“For any particular reason?”

“I would say they have different views, but Beatrix keeps her views to herself. So they’ve never liked each other.”

Caid frowned at that response. “I’m afraid that’s not really an answer.”

“I love my brother Quinn. I haven’t figured out if I like him, though. I love my sister, too, but I also like her because she doesn’t annoy me nearly as much as anyone else.”

“I do like Beatrix. She just doesn’t share much of herself with anyone. People who are introspective are like that sometimes. I don’t fault her for it.”

“But Gemma does fault her?”

“I don’t think so. She just doesn’t like her. And the feeling is mutual. But family is all. That’s what my father taught me. That’s what he taught each of us. But does it matter? Siblings don’t always get along.”

“But there’s a reason the witches have chosen her. Isn’t there?”

“We’d like to find that out. Laila would like to leave tomorrow with Beatrix, but I know she’ll understand if that’s not possible. No more than three days from now, though. Do you think you can manage that with your family?”

“To the Witches of Amhuinn. Once they meet Beatrix, they will confirm her future rule or deny it. We’re not a part of that. We’re only here to protect her.”

Caid admitted the truth. “The Old King kept the truce between our lands. His sons will not. Everyone knows that.”

He’d had a feeling that would be coming.

“But it will be up to my parents to decide if she goes anywhere.”

He turned to walk back to the stables, but Keeley’s voice stopped him.

Caid faced her again, knowing exactly what she’d meant. “No. You don’t.”

“It’s not your judging that concerns me. All humans judge. But you don’t understand. I come from a protection clan. We do not work with gods or make spells. We protect our lands and our people. Meaning we don’t look like the other centaurs. We’re predators. Hunters. We kill and destroy.”

“I can’t tell if you’re trying to scare me or seduce me.” She shrugged. “Whatever. I want to see.”

The Amichai stared at her for a long time. So long, she feared he might have had a seizure.

“Are you all right?” she finally asked when the silence went on and on.

His gaze was locked on a spot behind her head and she wasn’t sure he was going to answer until he said, “I’m fine. Just . . . thinking about your response.”

“Will your sister show me?”

“Stop talking to me,” he ordered as he walked away. “And stop staring at my ass.”

“Just wondering how it looks with four legs.”

He stopped. Faced her. “What?”