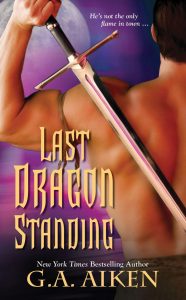 “What’s going on?” Éibhear demanded, storming over to them. “Why are you all arguing?”

Keita glanced at the two other males, shrugged, and said sweetly, “We’re not arguing.”

“A discussion does not an argument make, Éibhear.”

“What aren’t you telling me?” He looked from one to the other. “What’s Mum up to?”

“Nothing. She was just being herself. You should be used to that by now.”

“Don’t lie to me, Keita. You know you can’t lie to me.” He was right. She couldn’t lie to any of her brothers because none of them were distracted by a random touch or secret smile. “There’s something going on and I want to know what.”

Keita held up her hand. “Don’t order my brother around.”

“Don’t get that tone with me, warlord. I can handle my own brother without any help from you.”

“Handle me? You need to handle me?”

Her patience waning, Keita said, “Stop. Everyone just…” She frowned, her head tilting to the side. “Ren? What’s wrong?”

He pointed at something behind Keita. “Don’t we know that horse?”

Keita glanced over her shoulder. “Looks like Annwyl’s horse,” she said, scratching her ear.

A moment later, she froze at the sound of steel against steel.

“Gods,” she said, turning to her brother.

Together they shot off, heading for the nearby road. They ran past the trees and Keita squealed, falling back onto her rear, the blade of a sword nearly taking off what she’d always considered her very precious nose.

Hands lifted her from the ground and put her back on her feet. “You all right?” She expected it to be Ren, but it was Ragnar who stared down at her with concern.

“My brother would never kill a woman.”

“That’s not a woman,” Keita said. “Not in the literal sense.”

Meinhard raised his shield, the bitch’s blade slamming into it, pushing him back. Gods! What strength she had.

And yet she was human.

He lowered his shield to see that the woman had her back to him, busy now with his cousin. Meinhard thrust his sword forward, aiming for her side. His intent to wound, incapacitate. Not kill. But she turned at the last second, his blade moving past her, Meinhard stumbling forward. That’s when she slammed her elbow into his face, shattering his nose.

He barked and she went low, her foot slamming into his calf. To Meinhard’s shock, he heard bone break, felt something go “pop” in his leg, and he went down hard on one knee.

The pain would be tolerated. The break would heal. But the humiliation—that would not be borne!

Meinhard watched his cousin force the woman back toward him. She was less than a foot away when he swiped his shield at her back. It hit her on the side, sending her flying into a close-by tree. She crashed into the trunk hard, bounced away from it and into the ground, rolled to her feet and went at Vigholf once more.

Vigholf swung his blade but she went up and on his back, her short sword raised high.

“Annwyl, no!” Princess Keita screamed while Éibhear caught the vile woman and yanked her off Vigholf from behind while Ragnar caught hold of Vigholf and pulled him back.

Keita stood between them all, her hands raised. “Everyone calm down!”

“Calm down?” Vigholf demanded. “That crazed bitch attacked us!”

Meinhard felt hands on him and looked up into the strange face of the foreign dragon. Without a word said between them, Meinhard allowed him to help him to his one good foot.

“My Lord Vigholf,” Keita said soothingly. She turned to face him. “Please accept my…”

Eyes wide, she stared at Vigholf and Meinhard quickly followed her gaze, terrified that he was about to see his cousin bleeding to death from a wound they hadn’t noticed. But it was worse than that. Far worse.

Keita covered her mouth with her hand, her brown eyes wide. Unsure what he’d find, Ragnar looked at his brother—and released him.

Poor deformed Vigholf looked down at himself. “What are you all looking at?”

“Perhaps,” said a cold female voice, “they search for this.”

Vigholf raised his head as the human female held up the long, single braid of thick purple hair that once belonged to him.

“Sorry about that,” the woman said, grinning. “I was trying for your entire head. But you move much faster than your ox-like size would suggest.”

“Don’t worry.” She swung the braid back and forth. “This will look amazing in my helm when I ride into battle. Purple’s never been my color, but I think it’ll work just fine.”

“You mad cow!” Vigholf screamed, and Ragnar caught hold of his shoulders, barely managing to hold his raging brother back. Not that he blamed him.

Keita moved closer to the woman and slammed her hands against her shoulders. “Stop this right now!”

The woman frowned, staring at Keita. For a moment, Ragnar feared for the royal’s safety until the woman asked, “Keita?” Then she smiled, pushing the Blue’s hands off her waist. “Keita!” The woman dropped her blade—if not the braid—threw her arms around Keita and hugged her tight. “Gods! I’m so glad to see you!”

Keita let out a breath, gave a small nod to Ragnar. “And I you, sister.”

The woman spun around and faced the Blue. “Éibhear!” She threw herself at him, wrapping long legs around his waist and arms around his neck. “Oh, Éibhear!”

Laughing, the Blue hugged her back. “That’s the welcome I was hoping for.”

“She mutilated me,” Vigholf said to him. And he wasn’t far off. Although no Northland male would ever wear his hair as long as the Southlanders did, they still prided themselves on what they did have. Before any major battles, related females or mates would the Dragonwarrior’s hair into war braids. When the battle or war was over and had been won, another ritual took place where the braids were taken apart and the long single plait was returned. It was a simple, unadorned thing, but meant much too many.

But the truth of it was that they were in dangerous and foreign territories and had serious issues at hand. And retribution for the damage this female had done could not happen. “Not here, brother. Not now,” Ragnar whispered.

“Whenever you like, Lightning,” that woman offered, finally crawling off the Blue. “Now, if you so choose.”

Vigholf snarled but Ragnar held him back with his hands against his shoulders. “Calm down.”

“Don’t hold him back. Unleash him so I can finish what I started and then,” the human female pointed a finger at Ragnar, “I can finish the rest of you.”

“What is wrong with you?” Keita demanded of the human. “Why are you acting like this?”

“You don’t think I know? That I hadn’t heard what they did to you?” Green eyes glared at them from under uncombed hair. “They kidnapped you, Keita. Trying to force a female into what they want. And for that”—the woman bent her head from one side to the other, the sound of bones cracking radiating across the road—“they lose their heads.”

She pressed forward and Ragnar turned so he faced her. Not willing to let anything happen to Vigholf, Ragnar prepared to unleash a spell, but again Keita got between Ragnar and his kin and this crazed human female.

“No! You’re wrong. That’s not what happened.”

Keeping her eyes on Ragnar, the human asked, “Then what did happen?”

Keita cleared her throat. “These were the ones who rescued me from Olgeir.”

“Do you think I’d really protect anyone who had a hand in my kidnapping?”

“Annwyl?” Ragnar repeated, suddenly remembering that Keita had said the same name when she’d burst out of the woods. “This is Annwyl?” Ragnar looked the woman over from her absurdly large feet to the top of her unkempt head. “This?”

This human who had more muscles than seemed necessary for any royal and watched him and his kin with what he could only term as the mad eyes of a diseased animal.

Keita lifted her hand to silence him, her intense gaze warning him. He noticed that she made no large moves, kept her voice even and controlled. “Queen Annwyl of the Dark Plains, please allow me to introduce you to Ragnar the Cunning, his brother, Vigholf the Abhorrent, and their cousin Meinhard the Savage. My lords…this is Queen Annwyl, human ruler of these lands and my eldest brother’s mate. Now before we go any further, just let me say—”

The human held up her hand. “Wait. I’m sorry. Your name is…Vigholf the Abhorrent?”

“Why don’t we have names like that in the Southlands? I’m just Annwyl the Bloody. That’s bloody boring is what that is. But Annwyl the Abhorrent? Now that has a lovely ring to it, don’t you think?”

“Annwyl.” Keita pressed her hand to the woman’s forearm. “Lord Ragnar and his kin are here under my and Éibhear’s protection.”

“Really? Even though they kidnapped you…twice? First this one’s father and then him.”

“I already told you, he rescued me from Olgeir. And the gods know we can’t charge him with what his father did. You, Annwyl, should know that better than anyone.”

“Nothing more than a silly misunderstanding and absolutely no reason for there to be any anger.”

“Silly misunderstanding? Really?” The queen’s grin spread across her face, making her appear even more insane. “Then I guess we can call all this”—she swung the braid in her hand—“a silly misunderstand as well? Eh?”

She laughed, kissed Keita on the cheek and waited until the Blue lowered himself so she could kiss his cheek. “I’m glad you’re both home. Perhaps you’ll stop my mate from roaring so much these days.” She clicked her tongue against her teeth and her horse came forward. “Make sure to see the children. Tell Fearghus I’ll be back later.”

The human queen tucked his brother’s braid into the belt around her waist, her sword and shield on her back, and she somehow managed to mount a horse that would be too big for many Northland men. “I look forward to seeing you all at dinner.”

With another laugh, she spurred her horse and rode off.

Keita shrugged. “She has moods.”