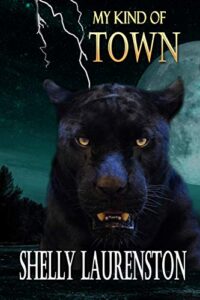 MY KIND OF TOWN

“We’re not blood. Me and Kyle. His daddy took it upon himself to defile my momma. To ruin her pure innocence.

Laughing, Emma asked, “Um…she already had you. So how innocent could she—”

“She was innocent and I won’t hear any different. This is nothing more than an unholy alliance as far as I’m concerned.”

For some unfathomable reason, Emma liked Kyle’s brother. She definitely liked him way more than she liked Kyle. Tully could talk to anyone it seemed. Emma always had a hard time holding conversations. Small talk had never been her friend, but Tully Smith made it easy even while she knew his presence here wasn’t merely altruistic.

Besides, around Tully she didn’t get all…squirmy.

“Don’t you have a baby sister, though, because of this unholy alliance?”

“The only good thing to come out of it, if you ask me.”

“What about your real father?”

“Ah, yes. My real father. Well, Miss Emma, he’s what they would have called in ancient times a bastard. And we avoid each other’s company as much as possible.”

Tully looked at her hospital door. “You gonna stand out there all day, Hoss, or are you coming in?”

Emma frowned and glanced at the door. “Who are you talking—”

The door opened and the biggest man Emma had ever seen in her entire existence walked in carrying the duffle bag she brought with her from New York.

So tall, the man’s head nearly touched the ceiling; so wide she wondered how he got through the damn door. Well into the three hundred pound range but without an ounce of fat on him, his body wasn’t awkward because of its size. Instead, perfectly proportioned.

Like Kyle, this man wore black boots, black jeans, and a black T-shirt with the Smithville County Sheriff’s Department logo stitched in white on the front. But he also had on a black baseball cap with the same logo.

Brown hair, brown eyes and, except for that rather permanent-looking frown on his face, incredibly handsome.

“Miss Emma, this is Sheriff Bear McMahon. And yes, Bear’s his real name. Bear, this is Emma Luchessi our little accidental visitor.”

The sheriff touched the rim of his hat. “Ma’am.”

Holy shit. Emma had never heard a voice that low before.

Say something you idiot. Don’t just stare at the man. “Nice to meet you, Sheriff.”

“I’m glad you’re here, Bear.” Tully stood up. “I want to take our Miss Emma to breakfast in the cafeteria but your deputy has made that impossible.”

Tully took Emma’s hand and lifted it so Bear could see the handcuff.

“And,” she added, a bit desperately, “to be quite honest. I really have to go.”

Dropping her duffle bag on an empty chair, Bear sighed and walked over to Emma.

“Some days I wonder ‘bout that boy.”

“I know.” Tully agreed with a small smile that didn’t seem at all brotherly. “I don’t know how you trust him with human lives.”

As Bear leaned over to let her loose, Tully gave her a slow wink and she nearly shivered. Dangerous. This man was very nice and very dangerous.

“There.” Bear removed the cuffs and slipped them into the back pocket of his jeans.

Emma scooted off the bed and grabbed her duffle bag. “Thanks.”

Tully snorted. “We will?”

With a low grunt, Bear grabbed Tully by the back of the neck and shoved him out the door.

Emma nearly sprinted to the bathroom and gratefully used the toilet, trying hard to keep her relieved sighs to herself. Once done, she dropped the bag on top of the closed toilet and reached back to untie the gown. That’s when she felt it. A deep, painful sting. Panic swept through her, and she practically tore the gown from her body. Then she stood in front of the mirror over the sink and raised her left arm.

She stared at the clear bite mark on the inside of her upper arm. Right where she’d put it when Dream-Kyle made her come. Of course, with her arm handcuffed to the bed that was physically impossible to do in her sleep unless…

Well, this just got horribly weird.

Kyle walked into Emma’s hospital room, freshly showered, dressed, and fed, only to find the woman and his favorite pair of handcuffs gone.

Finding her gone only irritated him a little. The lingering scent of his mongrel brother and that flea-bitten bear, though, had him spitting mad.

Focusing on Emma’s scent rather than Tully or Bear’s, Kyle found them easily enough. They sat at a long table in the cafeteria eating a typically large Smithville breakfast.

Kyle hung back by the entryway and watched Emma, all that hair still partially covering her face. Like a sucker punch to his gut, all those intense feelings from the dream came rushing back to him, holding his body and his mind hostage.

Damn the woman. Damn her to hell and back.

Without a word, Kyle stormed over to the table and sat in the chair opposite from Tully and cattycorner from Emma. Bear by his very nature and size, always needed more space, so he sat three chairs over.

“I turn my back for ten seconds,” Kyle stated while grabbing a link sausage off Emma’s plate, “and you disappear on me.”

Emma picked up a slice of toast and bit into it, all while staring at him, but she didn’t say a word.

“Lord, little brother, you sure are cranky this lovely summer morning.”

Without taking his eyes off Emma, “Shut up, Tully.”

“I wonder what has you so tense. Could it be the daily stresses of your job? Are your Wranglers too tight? Has that stick up your ass gotten bigger?”

Emma laughed and Kyle turned on Tully like a rattler on a mongoose.

They were ten seconds away from going after each other with fangs and claws whether completely human-Emma was there or not, but the growled, “Y’all,” immediately calmed them down. Only Bear had that ability. The man could make “y’all” sound like the scariest thing ever.

And that’s all Bear said. A man of few words, Sheriff McMahon kept the town safe and everyone in line simply by being what he was…a big bear. They were the perfect breed for sheriff. No affiliations except with their own kin. No Packs, Prides, or Clans to speak of. They didn’t like anyone really, even each other, so favoritism was never a big problem. And whether human or bear, they were enormous, so even tigers at sometimes seven hundred pounds when shifted had to think twice before challenging them. Bear’s ability to defuse brawls between lions and hyenas had become legendary.

As long as you stayed out of their way and didn’t make too much noise when they were around, brown and black bears made great law enforcers.

Bear took his position from Momma McMahon and one day Bear’s fifteen-year-old son, Luke, would probably do the same. If for no other reason, the McMahons really didn’t feel like going anywhere else and starting over. Bears liked their lives simple and quiet. And Kyle’s boss was no different.

Sopping gravy with his biscuit, Bear asked, “Can you explain to me, Deputy, why Miss Emma was wearing your handcuffs this morning?”

“She stole my phone.”

“Borrowed,” she squeaked in. “I borrowed your phone.”

Bear silently chewed his biscuit for several long seconds, then said to Emma, “You do know stealing is a hanging offense around here, don’t ya?”

Emma threw up her hands. “It is not! And stop saying that. You’re freaking me out.”

Going back to his biscuits and gravy, Bear grumbled, “I’m just sayin’…it could have been worse for ya.”

Even though she rolled her eyes in exasperation, Emma still smiled. A smile that had Kyle staring at her like a lovesick cub. He didn’t even realize it until Tully kicked him under the table to snap him out of it.

“Oh, yeah. Anyway, I was a tender fifteen. She a saucy eighteen year old—”

“Not that,” Emma laughed. “I meant about your family.”

“Oh. Well. You’ve got your Carolina Smiths. North and South. Your Alabama Smiths. Your Tennessee Smiths. Your Kentucky Smiths. And your Texas Smiths, but they ain’t real friendly. As well as Florida, Detroit and, of course, the West Virginia Smiths.”

Kyle glanced at Emma and shrugged. “Of course.”

“But it all started right here when the first Smith arrived on these shores about four hundred years ago.”

“You can trace your family back that far?”

“Most of us around here can.”

Emma shrugged. “I know I have a great aunt who lives in Sicily on my dad’s side and a cousin on my mom’s side in Jiaoling Prison for gunrunning.”

Kyle sighed. “Well isn’t that a lovely tale to tell your grandchildren one day.”