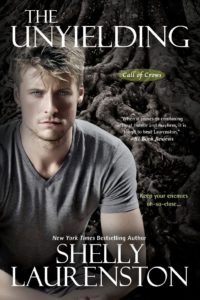 Tommy aimed his gun at Erin Amsel’s chest. He hadn’t checked to make sure she was dead the last time when he’d thought he’d killed her. Two bullets to the back of the head. What else was he to think? But this time he would end it. One to the head and two to the chest. That was always the best way to take a person down and make sure they stayed down.

But before he could pull the trigger again, the ground beneath his feet shook and he turned, his weapon instinctively raised.

Surprised, he gawked at the man standing behind them, partially shielded in the dark. The headlights of their vehicle showed only a bit of his face . . . and his size.

“Who the fuck are you?” Tommy demanded, not sure how stupid this man could be.

The man didn’t say anything. He just pointed.

Tommy looked over his shoulder, his eyes widening. Horror coursed through his blood stream as he watched Erin Amsel getting to her feet. Digging into her forehead until she pulled the bullet out.

Her scream snapped Tommy out of it. “Kill her!”

The men raised their guns, but the SUV suddenly spun to the side and he briefly wondered if that man had moved it. With his bare hands.

No one was that strong.

They were both gone. Amsel and that man.

Tommy and his guys looked around, trying to see in the dark, the headlights illuminating a different part of their surroundings.

“Where are they?” Tommy barked. “Where the fuck are they?”

Feet hit Tommy in the head and he realized that Tesco was disappearing up into the sky.

They could hear Big Tessy’s screams before he came back down, landing hard on his face. Blood poured not only from where he’d landed but from his back and inside thighs. Damage he wouldn’t have suffered from a straight fall.

Their SUV spun, crashing into several of Tommy’s men, sending them flipping into the dark. Tommy could hear bones shattering, the groans of his men.

But there was no one behind the wheel of the SUV. It was like someone had pushed it. Again.

Backing up, feeling terror for the first time in decades, he held the gun out in front of him, flanked by the last two of his men.

Until they were gone, too, dragged off into the night.

He whirled around at Amsel’s voice, ready to fire, but she caught his hand, turning the weapon away. Her free hand rammed into his forearm and he felt the bone shatter from that one hit.

Tommy dropped the gun and fell to his knees in the dirt.

Amsel kicked the gun aside and rested her hands on her hips. “Tommy, Tommy, Tommy.” she said, smiling, despite the bruises and blood on her face from the beating she’d taken. And that shot to the head. “You do know I’d forgotten about you, right?”

“You know him?” another voice asked. The big man from earlier.

He came out of the darknesslooking really pissed off, Tommy’s last two men gripped tight by their throats. He tossed them aside like they were nothing.

“I do. From a long time ago. This is the man who killed me.”

“Don’t you mean tried to kill you?” Tommy asked, cradling his broken arm against his body.

Amsel crouched in front of him, one finger stroking his cheek. “No, no. You actually did kill me. But before my last breath, she came to me. A goddess named Skuld. And she made me an offer. Gave me a chance at a new life. A Second Life.”

The woman was insane. Tommy knew that now, but he could play along. “You just had to give her your soul, right?”

“Aww. It’s sweet you think I actually have one. But no.” She traced the line of his jaw and it felt weird.

He glanced down and saw that the tip of her finger no longer looked like a finger. Not a human one. Black and dangerously sharp, it reminded him of . . . a talon?

Why did this woman have a talon?

“She promised me,” Amsel went on, “that I’d never have to be scared again by assholes like you. And she didn’t lie to me.” She flicked that talon and pain seared his cheek, blood poured down his jaw. “If you’d just left me alone, Tommy, this wouldn’t be happening.”

The man with Amsel took a knee behind Tommy and grabbed a handful of his hair, yanking Tommy’s head back. “Why is he still alive?”

“Are you in a rush?” Amsel asked, laughing a little. “Got something else to do?”

“And yet you haven’t wasted him.”

“Death is so final.” She looked at Tommy and added, “Usually.”

The man growled and she threw up her hands, revealing that all her fingers were black talons.

“I don’t understand why you’re letting him live.”

“I don’t understand why you’re so uptight. My God, man, loosen up.”

“He shot you in the head. I’d think you’d be a little angrier.”

Amsel shrugged. “I don’t let the little things bother me.”

“He shot you in the head,” the man repeated. “How is that a little thing? And then he did it again!”

“You are not making friends, Tommy. He so wants to kill you,” she mock-whispered.

“But I’m not going to kill you.” She grabbed Tommy around the throat with both hands and stood, taking Tommy with her, the man forced to let go of Tommy’s hair. “That would be too easy. Because you don’t deserve the quick exit of an honorable death. You deserve to suffer.” She smiled. “And I’m going to be the one to make sure you do.”