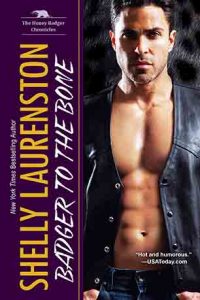 BADGER TO THE BONE

“So what happened in the Bronx?”

He sat on her couch, bare chested and shoeless. His mostly black hair was a mess, falling over his eyes, but the green glared at her from across the room. He was a very handsome man but stubborn. One of those guys who believed the things right in front of him and nothing else.

“Because whatever happened scared your uncle and his burly friends.”

“Those burly friends were his sons.”

“Yes.” She came across the room and plopped down on the couch. She loved this couch. It was huge! Her entire basketball team could sleep on this thing at the same time. Even the subs. “So how are you feeling?” she asked, sitting cross-legged.

“Much better. Whatever you gave me is wearing off.”

Max rolled her eyes. “I didn’t give you anything. I saved your life.”

“If it was drug related, what you saw in the kitchen would be known only by you . . . but I know you saw a giant panda.”

He blinked and she shrugged.

“Drug-induced delusions are usually particular to the person experiencing them.”

“My sister is a scientist and she talks about that shit all the time. Besides, I did a whole paper in high school on the experiments the government ran on soldiers in the sixties and seventies.”

“I was curious. And my teacher rejected the paper I did on serial killers. I don’t know why. It was very detailed. I clearly did my research. But the next thing I knew, I was talking to the school shrink.”

“That doesn’t exactly shock me.”

“Did you have to talk to the school shrink?”

“In my school, they were just glad I wasn’t selling drugs to the freshmen.”

“Where did you grow up?”

“Here. South Bronx. With my grandfather. And you?” he asked after a moment, but she got the feeling he was just asking to be polite. He didn’t really want to know. He wasn’t even looking at her when he asked the question. But that didn’t bother Max. She liked his indifference. She’d discovered that men who wanted to find out everything about you in the first five seconds were the same ones you had to eventually get restraining orders against.

“I was born in Detroit. Lived with my mom until she got busted for a jewelry heist in Bulgaria. Charlie’s mom took me in, and I lived in Connecticut with Charlie, her mom, and eventually Stevie until Charlie’s mom was murdered. Then me, Charlie, and Stevie hiked to Wisconsin, where Charlie’s grandfather took us into his Pack. We stayed there until both me and Charlie graduated high school. Stevie went to Oxford at fourteen to work in a lab there, doing something with physics or whatever. I never asked exactly what she was doing because I didn’t care. But we did go with her to England and that was okay. We had a nice time and Oxford paid for it. But when she turned eighteen, me and Charlie had to make our own way financially. We still kept an eye on her, though, because if we didn’t, Dad tended to sell her to drug dealers so she could make their drugs.”

He was finally looking at her now. Staring at her with wide eyes.

“Oh, and just a side note . . .” She lowered her voice a bit in case Charlie was anywhere within hearing range. She had excellent hearing. “Any time my father is mentioned, Charlie goes off on a whole thing about how much she hates him. Just let her rant. I mean, it’s all true. She hates him. Not that thing in books and movies where she loves-him-but-hates-him either. It’s just pure hate. But it makes sense, when you think about it. Her mother was murdered and my mom is in prison because of our father. Although, I should clarify, he didn’t actually kill her mother and the Bulgarian cops put my mom in prison. But the men who killed her mother were looking for our dad, and he was part of the crew that my mom got busted with and he left her there with the rest of the gang to be picked up by the cops. Actually,” she added, realizing, “the reason Devon is trying to kidnap me is because he got out of prison and whatever loot they kept from the heist that the cops didn’t find . . . he wants it back, thinking my mom has it, but she doesn’t. But he thinks he can get my mom to tell him by kidnapping me and maybe sending her a finger or whatever. Honestly . . . I’m thinking if there was any loot left, my dad probably grabbed it, but I’m sure he’s lost it all by now. Probably to women and gambling . . . and liquor. And very bad Ponzi schemes. My dad is the worst criminal,” she admitted.

He was still just staring at her, so she asked, “So what made you join the Marines?”

“Whatever crazy story you just told me—”

“Who’d make that shit up? Well,” she reasoned, “maybe Stephen King. But then it would involve murderous clowns or haunted hotels or . . . the end of the world. Have you read The Stand?”

“Is this how Manson worked?”

“Charles Manson. Did he just vomit up incredibly weird stories while convincing nubile young girls that they had special powers that allowed them to shift into things?”

“No,” Max admitted. “Our kind is no different from full-humans. We’re just better.”

“How is that not different?”

“Look, there are a lot of reasons there are shifters. Most involve ancient magic and ancient people, but whatever happened back then, it eventually led to a genetic—”

Max had been talking with her hands, as she liked to do. But when he said that, she dropped her hands into her lap.

“Being a shifter isn’t a defect or a superpower. It just is. We are just what we are.”

“We know. Those we love, some of whom are full-human, know. But our kind has spent centuries making sure that we are never found out so that full-humans don’t turn us into their personal guard dogs or do Mengele-like tests on us in an attempt to steal our genetic gifts.”

Vargas frowned. “What are you talking about?”

“Don’t you get it? In order to protect our kind we’ve got people everywhere, we’ve infiltrated everything.”

“So, you’re saying…your people are in our government.”

“We’re in all governments. We have to be. How else do you think we protect our kind?”

“And how did that happen?”

“Bloodlines. He was a distant cousin of Teddy’s. Like a fifth cousin or something. And it’s MacKilligan lore that our family is very distantly connected to—”

“Braveheart or Robert the Bruce?” he asked, now sounding bored and unimpressed.

“Okay,” he said, slapping his hands against his thighs. “We’re done. I can’t hear any more of this craziness. I just can’t. I’m not a cat. You’re not a badger—and why anyone would want to be that, I do not know—”

He sighed and then went on. “And I just can’t do this anymore. Plus, I can’t stop thinking about who can fit this goddamn sneaker!” he said, reaching down and retrieving one of the triplets’ shoes from next to the couch. The boys tended to leave their shit everywhere, while their sister was much tidier.

“So, what I’m going to do,” he said, standing up, “is get a shirt, borrow your cell phone to call a car, and get back to my non-crazy life.”

She could tell he meant it too. He was going to push everything he’d experienced in the last twenty-four hours from his mind as only a cat could. Because when cats didn’t like something, they simply pretended it didn’t exist. And that’s what he was going to do. Pretend that she didn’t exist, her sisters didn’t exist, and that none of this had ever happened.

But as always in the world of shifters . . . the bears came in and fucked all that shit up.

It was kind of cute, too. The Dunn triplets did it sometimes, when they thought no one was looking. In their grizzly forms, they marched through the house humming “The Bare Necessities” from that old Disney movie.

The three of them, in a line, lumbered through the living room with their big grizzly heads swinging, all three thousand pounds marching along . . . and humming.

Vargas watched them go by in silence. When they’d made it out of the room, he stood. Max expected him to grab the phone she had in the pocket of her basketball shorts but he just . . . walked out. Not out of the house, but upstairs. She could hear his bare feet slowly slapping against each step.

A few seconds later, a calm but concerned Stevie returned to the living room and pointed in the direction of the stairs. Her furrowed brow silently asked Max what had happened.

And all Max could do was cringe. “I think I broke him.”