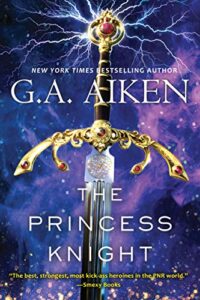 Gemma removed her fur cape and the chainmail shirt her mother had made for her, leaving only the thick white shirt she wore under it. She moved her arms and shoulders; twisted her head from side to side.

Shona looked over the weapons she had on her sword belt. “Long sword or—”

“Thomassin and the others had different plans,” Katla needlessly pointed out.

“Just go along? I’m a war monk. We were never trained to just go along. Joshua’s ashes would be swirling around in his . . . wherever they are.”

Shona moved closer. “Don’t make the mistake of thinking that Sprenger is not a good fighter, Brother. He’s always been a good fighter. And over the years he’s only gotten better.”

“Do either of you really consider this a pep talk?”

“If you want a pep talk, we’d suggest Kir. But he’s too busy crying.”

“We just got you back,” Kir sobbed when the women looked at him.

“The faith all of you have in me is overwhelming.”

“Ahhh, how I’ve missed the brotherhood of it all.”

It was worrisome. First, he saw Farlan whisper to Samuel, “Go down to the stables and get the horses ready. Be ready to move. Understand?”

And off the boy went, to get the horses and supplies they’d need. No one stopped him. None of these monks paid the least bit of attention to Samuel. Of course, Quinn had the feeling they’d paid little attention to the poor kid when he’d been an actual squire wearing the tunic of the monastery.

That wasn’t what was worrisome, though. It was what he saw after that. Ragna spotted Samuel moving through the crowd and with a subtle nod, she sent one of her own warriors to follow. Why? Why was Ragna sending one of her rather fanatical soldiers to follow a kid? What was really going on? And what did Sprenger mean when he said something about their having “talked about this”? What had they talked about? Gemma? Thomassin? This Challenge? What exactly was happening here?

But before Quinn could decide what his next move should be, his sister grabbed his arm. And it was the urgency with which Laila grabbed him that pushed all other thoughts temporarily out of his head.

“You need to irritate Gemma,” she whispered to him.

“You just told me to stop irritating her.”

“That was before,” Laila insisted. “When I thought we might get out of here without a fight. Now that’s obviously not going to happen. So now you need to irritate her.”

“What do you think?”

“You know, this isn’t something I can just make up on the spot.”

“You are kidding right now, aren’t you?”

“No. I don’t just irritate her to irritate her. She’s irritated by me for some unknown reason. So I have no idea what I could possibly say at the moment that would annoy her so much it would distract her from something as serious as what is about to happen here at this very—ohhhh! You know what? I have something.”

Quinn shook off his sister’s grip and made his way over to Gemma’s side. She stood alone with two swords in her hands. A long sword and a broad sword. She swung both, stretching her arms and shoulders.

Gemma stopped moving, turned to face him. “What?”

“Is this a fight to death?”

“Why are you asking?”

“Stop being an ass and just tell me.”

“Fine. I’m not going to waste my time playing your little games, Amichai.”

She took several test swings with each sword before turning back to him and asking, “Does this have anything to do with my horse?”

“Dagger? Dagger will be fine.”

“Not Dagger. And you know I don’t mean Dagger.”

“You’re calling that abomination your horse?”

“You’re calling her an abomination?”

“It is an abomination and that’s why if you don’t make it, I’m putting it down.”

Her back straightened. “You will do no such thing.”

“I’m not leaving that thing to roam the earth half-dead.”

“Of course you won’t. You will take it back to Keeley—”

“I am not taking that thing back to Keeley! And I am not going to have it around your family!”

“Brother Gemma,” a monk called out, “please join us here—”

“I don’t know why you’re getting hysterical.”

“I am not hysterical.” But she spit that out between her teeth.

Moving over to their traveling companions and gesturing to Laila with both swords, Gemma wanted to know, “And you, Laila . . . ? Would you protect Kriegszorn?”

“Oh!” Laila replied, forcing a smile she clearly did not feel. “That’s right. It has a name.”

“None of you would protect Kriegszorn?” she demanded of the whole group. “Keran?”

“The bloody thing has fangs. And it’s rotting. It’s rotting with fangs.”

Gemma turned to walk away, but Quinn just had to point out, “Aren’t you being just a bit of a hypocrite?”

She spun back around so quickly, their entire group took a step back.

“Are you coming or not?” Sprenger demanded.

“Shut up!” She stepped closer to Quinn. “What did you say?”

“I said, aren’t you being a bit of a hypocrite?”

“About your demon horse.”

“Fine. Abomination then. You’ve given Keeley such a hard time about her wolves, going on and on about them but now, when that thing is clearly unholy . . . suddenly you have some moral objection to doing what is obviously right, which is chopping it into the tiniest pieces, salting them, and performing whatever banishing spell is necessary to send it back wherever it came from.”

Gemma was silent for so long that Quinn thought she was simply going to walk away. Perhaps, never speak to him again. But after several extremely long seconds of staring at him, she finally said with extreme, absolutely terrifying calm, “I am going to go over there and kill Sprenger. And when I’m done with him, I’m going to come back over here, cut your centaur balls off, and feed them to Kriegszorn.”

There were several more moments of brutal, silent staring until she exploded with, “Is that hypocritical too?”

Laila stepped in front of Quinn to protect him but Gemma had already stomped away.

“Was that the kind of irritation you were talking about?” he asked his sister.

She lovingly patted his back. “One day the elders of our tribes will tell tales of your sacrifice, Brother. And your sad, early death.”