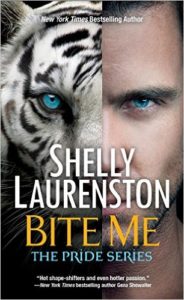 When Livy woke up, she had no idea where she was.

Blinking the sleep out of her eyes, she tried to focus on the sights out her window. After a few minutes of staring, Livy finally asked Vic, “Where the hell are we?”

Livy’s head snapped around. “We’re where?”

“The great state of Massachusetts.”

He sounded so damn cheerful about it, she wanted to deck him.

“Why are we in the great state of Massachusetts?”

“I was trying to think of where I could take you that you could relax. I thought about Lake Baikal.”

“Lake Baikal?” Livy gawked at the man. “In Siberia?”

“Yeah. But that would be a lot of travel.”

Before Livy could respond to that ridiculous statement, he pulled up to a road block manned by several uniformed police.

“Deputies,” Vic corrected. “And be nice.”

Vic stopped his SUV and rolled down the window. One of the deputies walked over, rested his forearm against the window frame, and leaned down to look inside. Because he had to lean way down, and his entire head nearly filled the entire open window…Livy knew this was a bear. One of those bears who had to live out in the middle of nowhere because their ginormous head would freak out the everyday full-human school child.

“You brought me to bear territory?” Livy asked.

“And that logic works for you?”

The deputy eyed Vic, then Livy, then back to Vic.

“Whatcha got there, Barinov?” The deputy sniffed the air, his wide nose making a disturbing amount of noise. “Don’t recognize the scent. And we don’t just let anybody into our little town.”

“This is Livy. Honey badger.”

The deputy’s grin was wide. “A honey badger? A real one?” he asked with what sounded like true enthusiasm. “Hey, guys,” he said to the other deputies, “we’ve got a real honey badger here!”

The deputies suddenly crowded around the SUV, all of them staring into the vehicle to get a look at Livy. As if she’d suddenly turned into a carnival sideshow.

“She is just the cutest little thing,” the first deputy said. Then he reached the longest arm Livy had ever seen on a human being across the cab and attempted to “coochie-coo” her face.

Livy looked at Vic. “Can we go home now?”

“I can get honey at your house.”

“And I can get more holes in my house. No thanks.” Vic asked the deputy, “Can we go in, Mike?”

“Sure. And don’t forget the festival’s happening this whole weekend. It already started.” Deputy Mike waved at Livy. “Bye, cutie!”

One of the other deputies hauled a heavy-looking, solid concrete block out of the way—by herself—and Vic drove on. Heading down the road to…somewhere.

Livy, confused, asked, “What the hell was that about?”

“What was what about?”

“Most shifters don’t try to coochie-coo me.”

“This is a bear-only town. They’re not used to outside shifters. And few of them have seen honey badgers.”

“So…he thought you were cute.”

“When someone says I’m cute, they usually mean I’m cute as a woman. He acted like I was as cute as a stuffed toy. I think he wanted to cuddle me,” she said with disgust.

Vic shrugged. “You know, I can actually see that.”

Vic pulled into town and parked in one of the many empty spots along the tree-lined street.

He shut off the motor and gestured to the town outside the vehicle. “Welcome to Honeyville.”

Livy’s eyes rolled so far back in her head, Vic was worried she’d go permanently blind.

“I know. Pretty obvious for a bear-only town, but don’t worry,” he promised. “The town lives up to its name. They sell an array of honeys here. Foreign and domestic. And their home brand is—”

Vic did, because when Livy was polite like that…it was because she was about to start hurting people.

He got out of the SUV and looked around. He’d always liked this town, since the first time his parents had taken him and his sister here for vacation. Considering their mother was feline and Vic and Ira were hybrids, the bears had always been surprisingly welcoming to the family. Unlike the cat territory in the next town over.

But he had no intention of going over there. If the cats didn’t want him there, then they certainly didn’t want his money. Besides…the bears had honey.

Vic walked around his SUV, caught hold of Livy’s hand, and started walking, pulling the woman behind him.

“Where are we going?” she asked.

He didn’t bother to answer. Instead, he led her to his favorite store and walked inside. The woman behind the counter looked up at him and immediately smiled.

“Holy shit! Vic Barinov!” she exclaimed. Rita Thompson, sixty-year-old hippy grizzly who smoked pot at least three times a day—threw her arms open. “Get the hell over here!” She grasped Vic in an actual bear hug, the six-ten She-bear gripping him tight. “What the hell are you doing here?”

“My friend here needed a break and I couldn’t think of a better place to go.’

Rita looked around, then leaned over her counter and down at Livy. “Oh! There you are!”

“You’re like a hobbit!” Rita leaned over a little more. “Do you have hairy feet, too?”

Rita and Vic laughed but Vic stopped when Livy glared at him.

“Sorry.” He turned to Rita. “We’re actually here for some of your delicious—”

“What are you?” Rita asked Livy, cutting Vic off. “You’re clearly not a fox.” She walked around the counter and sniffed, frowned. Sniffed again. Frowned again. Then Rita leaned down and took a big sniff of the top of Livy’s head. Sharp, pointy, multiple fangs replaced Livy’s human teeth, but instead of attacking, she said, “Lady, if you don’t get the fuck away from me, I’m unleashing everything I’ve got in my anal scent glands until you’re blind from the stench.” Rita jerked away from Livy and Livy finished with, “And trust me when I say that no one will come into your store for days.”

“She’s my friend and under my protection, and she promises not to attack anyone. Right, Livy?”

“What are you talking about?” Rita demanded. “I don’t give a fat shit if she attacks anybody. They’re bears!” Rita clapped her hands, pressed her forefingers together, and pointed them at Vic. “But she cannot raid our hives.

“Of course she won’t raid your hives. Right, Livy?”

Vic bared a fang at Livy and, after she rolled her eyes, she said. “Fine. I won’t raid your hives.”

“See, Rita? Nothing to worry about. I promise, we’re here to buy. A lot. I’m trying to cheer up my friend.”

“Good luck with that,” Rita muttered before facing them. She put on her best fake smile and made a wide gesture with her arms. “Please. Look. We have honey from all over the world, but don’t forget our local wares. And feel free to try anything we offer.”

Without moving anything but her eyes, Livy examined everything Rita had to offer before announcing, “Do you have a cabinet I can use?”

Once Vic dropped a wad of cash on the She-bear, Rita let them use the kitchen in her house behind the store. With over fifty honeys to choose from, Livy sat inside the cabinet under the sink and Vic sat outside it, his unbelievably long legs stretched out in front of him.

Livy had to admit, these were the best-tasting honeys she’d ever had. Not only were there different types of honey, but there was honeys infused with all sorts of things. Chocolate, raspberry, peanut butter, cinnamon…the list went on and on.

Even better and much to Vic’s credit, he didn’t once ask what was going on with her. Didn’t mention Whitlan’s daughter or anything to do with that.

Instead, they just sat there in the She-grizzly’s kitchen, ate honey, and chatted about the most nonsensical stuff. Like sports.

“You have no idea,” Vic complained, “how hard it is to be six-five and two-hundred-and-fifty pounds in junior high and not join the football or basketball teams. The principal called my parents about it. Mr. Lawrence. He was very concerned that I was not taking full advantage of the American experience—my father told him to go fuck himself. ‘My boy,’” Vic said with a heavy Russian accent, “ ‘don’t need your weak American sport. He is Russian! He fights bear!’ Mr. Lawrence,” Vic went on with his normal voice, “was full-human so he thought that was a lot of hyperbole but I was, in fact, outside fighting bears. My cousins were visiting from Moscow that fall and they were beating the crap out of me in the backyard.”

Livy chuckled at the nickname. “Did you get that from Shen?”

“Of course. So what’s the deal with your cousin?”

“I mean why was she in prison?”

Livy normally didn’t answer questions like that about family members, but sitting here, in some strange bear’s kitchen, in Massachsetts, in a town called Honeyville, while eating fifty different kinds of honey…she thought, Why not?

“Melly was in prison because she felt her boyfriend was ignoring her, so she hooked up with another guy. When fucking someone else didn’t work, she arranged her own kidnapping.”

“I’m sorry,” Vic cut in, a spoonful of lemon-infused honey poised in front of his mouth. “She what?”

“Arranged her own kidnapping. It was an elaborate plan, too. The FBI became involved, there was blood at the scene, and calls from the”—she made airquotes with her fingers—“ ‘kidnappers’ with their demands, and she was just about six miles away at some resort with the guy she’d convinced to do this with her because of the money her boyfriend didn’t actually have. And, even after that, they were ready to let her off with most likely a wrist slap because they figured out she was crazy but not crazy enough to actually commit to Bedford Mental Hospital. But then she showed up to her sentencing drunk. So drunk she tripped over the defense table and vomited up a crapload of vodka on the baliff, which pissed off her judge. Got eighteen months, but as I found out a couple of days ago…she only served ten.”

“Wow,” he muttered, his cheeks sucked in a bit from the sourness of the lemon. “That’s mighty crazy.”

“That’s Melly. Crazy Melly.” Livy lifted her spoon. “These are the most amazing honeys I’ve ever tasted.”

“A few, though, I’ve had at your house. Now you see why I keep going there.”

“Now you know why I get so cranky when you eat it all. I love my honey.”

A door opened somewhere in the house and Livy heard what sounded like clanking metal coming toward them. After a minute or two, a male polar walked into the kitchen, dressed in full armor. Like, King Arthur kind of armor.

The polar placed his helmet—complete with a vibrantly colored feather plume—on the table. He stood there for a second until his head slowly turned and he looked down at Livy and Vic.

“Whatcha doin’ in my kitchen?”

“Renaissance Faire’s in town this weekend. You should come. Jousting starts this evening.”

“Thanks for the offer, but I’m not sure my friend would want—”

Livy crawled until she was stretched over Vic’s lap. “There’s jousting?” she asked the polar.

“Sure is. It’s an all weekend thing for us. First rounds start tonight.”

“Quiet.” Livy quickly scrambled completely out of the cabinet. “Can you get me set up with armor and a horse?” she asked the bear.

“I think so but we don’t have a fox joust at this faire.”