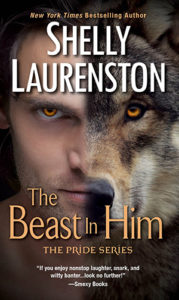 THE BEAST IN HIM

When the alarm blared to life at five, Smitty quickly shut it off and stumbled out of bed. No matter how many years he spent in the service, he never seemed to be able to grasp the whole early to bed, early to rise logic. He glanced back at Jessie Ann. She was still out cold, her head buried into his pillow, her naked ass peeking out from under the sheets she’d tried to kick off in the night.

One eyebrow raised, he debated about going back to bed and getting some more of that ass. Then he realized he couldn’t do a damn thing without his coffee. So, he made his way into the kitchen, ground up his beans and started the machine. Stopped by his bathroom and took care of some necessary functions and then went back out to the coffee machine to watch and wait.

He’d just poured himself a hot cop of coffee, his mouth already watering as he brought the mug to his lips.

“Oh, thanks, sweetie.” And like that, the cup was gone.

He glared down at the female who dared take his coffee. The life-giving elixir was his! Then he noticed she was fully dressed.

“You’re leaving?” Damn. And he really did have plans for that adorable little ass.

“Oh, yeah.” She sipped the coffee and grimaced. “Geez. Battery acid.” It suddenly occurred to him…she was perky. Who was perky at five-thirty in the morning?

Good Lord! Morning people were perky at five-thirty in the morning!

“I’ve got meetings all morning. I need to get to the office.”

“My pleasure,” he murmured with all honesty.

“Okay. Well…bye!” She turned and walked out of his apartment.

Wait. That was it? No passionate kiss? No promises of calling him later? Or making him promise to call her later? What the hell?

Confused and barely awake, Smitty stood staring at the closed door for at least a minute before he slammed the mug of coffee down on the counter and went after her. She stood patiently waiting for the elevator, her eyes bright and alert as she stared at the murals on the ceiling painted by the previous owner of his apartment. Smitty worked hard to ignore the fact she was muttering to herself.

“So when will I see you again?” he heard himself asking.

She looked at him calmly. “Got me. I’ve got a hell of a schedule.”

“But you can always text me.”

And she said that just like she might have said, “I don’t mind cheese on my salad if it’s available.”

He crossed his arms over his chest, barely aware he stood before her butt naked. “Text you?”

“Yeah. But I know we’re both busy.” She smiled. “Don’t worry. I won’t call you, crying hysterically if I don’t hear from you. No shotgun wedding.” Then she laughed.

The elevator doors opened and she immediately stepped in. “Bye, handsome.”

Fifteen minutes later and he was still standing in the same exact spot.

Three meetings and one high-level firing and it was barely eleven a.m. Once in her office, Jess kicked off her pumps and threw herself into her chair.

She had to admit, paying attention to any of it had not been easy. She couldn’t stop thinking about fried chicken and hard cock. Although those thoughts made that firing go a lot easier.

“Why should I suffer alone?” she murmured to herself.

Hell, it didn’t matter. She still had a lot of work to do. She spun her chair around and raised her wrist to look at her watch when she saw them all sitting there, filling up her couch and the available chairs—watching her.

When her four friends all continued to stare, she snorted. “Forget it. I’m not telling you guys anything.”

She liked how Phil had the nerve to sound so indignant that she wasn’t filling them in on all the details of her night with Smitty.

“Because it’s none of your business.”

“We told you about our first time,” Phil coaxed.

“You didn’t tell me anything. I was there. In a sleeping bag across the room desperately trying to mind my own business. But you, sir, are a screamer.”

Smitty woke up the seventh time someone called. They wouldn’t leave a message, they just kept calling back instead. He’d gone back to bed as soon as he’d walked back into his apartment. He didn’t really have any intention of getting up before he was ready. Seemed someone else had other plans.

Snatching the phone off the receiver, he barked, “Yeah?”

“’Bout time you picked up the damn phone, boy.”

“Who did ya think it was? The Queen of Siam?”

Sitting up in bed, Smitty shook his head. It was too early for this. Too early to deal with the one man who still rattled him. And he’d been having such sweet dreams, too. Well…sweet and damn dirty. He simply couldn’t seem to get enough of Jessie Ann. He should have worked her out of his system last night. But pathetic wolf that he was, he simply had to have her again. He would, too. He snorted when he realized all he had to do was text her. Lord, what he’d been reduced to.

“Huh?” Smitty shook his head again. Damn, he’d completely forgotten about his father. That had to be a first. Must be his lack of coffee. Anything before noon and he couldn’t focus without his coffee. “Oh, yeah. Sorry, Daddy.” He scratched his head, yawned. “So why are you calling me?”

“I’m trying to figure out this bullshit your momma’s been telling me. What does she mean you don’t want anything to do with the Tennessee Smith territory?”

Yeah. He needed his coffee…now. “Momma told me y’all were revising territorial lines and I asked her not to include me.” Smitty got out of bed and headed for his kitchen. “I’m not going to fight those idiots over Smithtown. Let them have it.”

“You always were a fool, boy.”

Faster. Make coffee faster. Cradling the phone between his neck and shoulder, Smitty tossed out the crappy coffee from earlier, ground up fresh beans, and poured water into the pot. His apartment didn’t have a lot, but a reliable, sturdy coffee pot would always be an integral part.

“Why does that make me a fool? I’m not coming back there, Daddy. This is my home now. This is Sissy’s. We’ll make this work.”

His father laughed. “Do you really believe that? Do you really think you’ll be able to compete with all those fancy high-end companies? Do you think that cat will stay loyal to you? He’ll be out as soon as he gets bored and you’ll be left holding that bag. Be smart, boy, for once in your life. Come back to Smithtown where y’all belong. Before those other Packs get a sniff of you and try to force you out. Y’all ain’t strong enough to fight off those bigger Packs and we both know it.”

Smitty pushed his empty mug away and leaned against the counter. “No,” he finally stated.

He disconnected the phone while his daddy was still going off and sat in the silence of his apartment for several minutes.

Several long minutes before that phone went flying, smashing into the wall and breaking into way too many pieces for him to bother repairing.

Jess walked into her office. Another two meetings. One right after the other. Barely one o’clock and already exhausted.

Sitting at her desk, Jess speed dialed her assistant. Bets worked on the floor right beneath this one. Normally Jess would have an assistant right outside her office but Betsy was full-human so she didn’t come to this floor without a special request. Jess knew the woman found it weird but she got paid so much, she overlooked it.

“Hey, Bets. Anything I need to know about.”

“I’ve emailed you a list of client call-backs you should make.”

“Can you handle any of them?”

“I can handle most of the calls…if you want me to.”

“I wouldn’t have asked if I didn’t want you to.”

“It’s not a problem, but usually you handle, well, pretty much everything.”

“I’m tired today. Too tired for bullshit.” It’s not like she got much sleep the night before. “So anything you can handle—”

“Not a problem,” Bets rushed in. Suddenly Jess wondered if she’d been holding the poor woman back. And if she had, why did Bets stay?

“I’ll send you an updated call-back list for people who really need to hear from you and not your lackey.”

She chuckled. “Let’s see. You also got a call from Kenshin Inu.”

Jess immediately perked up. “Oh, Kenshin! How is he?”

“Sounds fine. He’ll be in town in the next couple of weeks and he says he’ll want to get together. I emailed you his new cell phone number.”

“And a Bobby Ray Smith called.”

“He did?” Jess frowned. She told him to text her. Why would he call? And why was she so damn happy he did?

“Did he say what he wanted?”

“He wants to meet for lunch.”

“Call him back and tell him—”

“And he said if you start, and I’m quoting here, ‘Fussin’ about it’ to tell you that his daddy called.”

“His father called him?” That couldn’t be good. To be honest, Jess thought the man such a Neanderthal that he didn’t possess the necessary skillset to use a phone, much less dial out of the Tennessee region.

“I don’t really know if his father called him. I’m just repeating what he said. But I did enjoy his use of ‘fussing’ in a sentence.”

Jess went to look at her watch and that’s when she realized she didn’t have it on. Christ, where did she leave it last?

Panic flooded her system as she grabbed her backpack, tearing through it.

“He also said to tell you if you’re wondering where your watch is…he has it.”

She closed her eyes, horrified at how relieved she felt. No one should be that attached to an inanimate object. “Oh.”

“I won’t ask what that means. I’m sure it’s none of my business.”

“Not until three, so you’ll have some time. He’s waiting at the diner around the corner.”

“Okay. Is the meeting a call-in or face-to-face?”

“Call-in for the rest of the day. So you’re okay to change.”

“No problem. I’ll get back to you after I’ve spoken to the clients.”

Jess went to the small closet she had built into the wall and pulled out something much more comfortable to wear. Especially since she was only going to see Smitty. It’s not like she wanted to impress him or anything.