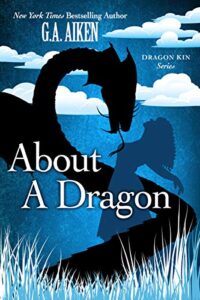 “Where the hell are the suns?”

Talaith’s head snapped up from her book at Briec’s angry shout somewhere off in the cave.

Éibhear sighed in disgust. “You never fail to embarrass me.” He placed a bowl of hot porridge in front of Talaith. Where he learned to cook, she’d never know, but she appreciated it. He even made normally boring porridge delicious.

Gwenvael glared down at the bowl of porridge thrown in front of him. “Porridge? You want me to eat porridge?” He looked up at Éibhear. “Has your mind slipped since last night? Where’s that horse I found the other day?”

Talaith, unable to hide her shock and not really wanting to, stared at Gwenvael in horror.

Éibhear cleared his throat and glared at his brother. “The horse, idiot brother o’ mine, is safe and alive somewhere else.”

“Come on, Talaith,” Gwenvael implored. “You don’t mind if we eat—”

He gave her what must be his best “imploring” face. “But, Talaith…my love.”

Éibhear laughed hard as Briec entered the chamber wearing only black breeches and boots. Does he have to look so…tasty? He sat in one of the chairs across from Talaith, threw his feet up on the table, pushed his porridge away and grabbed a piece of fruit. All while glaring at her.

She stared back, then said, “What are you looking at?”

He motioned to the ceiling with his hand. “Are you responsible for this?”

She glanced up at the rocky ceiling. It was actually kind of pretty with its sparkly shards hanging down. Of course, then she thought about those dropping on her head and suddenly they looked like dangerous blades. Shaking off the scary image, Talaith looked back at a still glaring Briec. “I didn’t do anything to the ceiling.”

“Not the ceiling,” he barked at her. “The weather.”

She crossed her arms in front of her chest. “Has being around dragons given me some kind of god-like status I am not aware of?”

Out of the corner of her eye, she saw Éibhear bend his head over his porridge, desperately shoveling it into his mouth while Gwenvael simply laughed out loud.

Briec ignored his brothers and pointed an accusing finger at her. “You are the witch.”

“An untrained one, as you so eloquently pointed out. Besides, why would I play with the weather and risk angering the gods?” Like she didn’t have enough of that to worry about in general.

“Perhaps because you don’t want to leave. You seem so comfortable with my brothers, little witch.”

She leaned forward, ridiculously angry and loving every minute of it. For some strange reason, she felt completely safe arguing with this dragon—odd. “Because your brothers haven’t been pawing me or trying to see me naked.”

Annoyed with the very sound of his voice, Talaith grabbed one of the fruits from the bowl near her plate and threw it. Her aim, as always, unerring. The large, round and juicy fruit slammed into Gwenvael’s head with unrelenting force.

She turned to look at him, one eyebrow raised in challenge. “Your point?”

He growled, and she grinned. Which did nothing but piss the dragon off. But before he could do or say anything else, Éibhear looked up from his empty bowl. “So!”

Startled by his near shout, they all stared at him. “Doesn’t seem like the rain will let up. What would everyone like to do today since we’re stuck inside?”

Talaith pointed at the book on the table next to her bowl. “I’ve got this.”

“You read?” For some unknown reason, Éibhear seemed ridiculously happy about this.

“I know where there are more books.” Éibhear jumped up and was out of the cavern in seconds.

“But I already have a book,” she said to no one in particular.

“I guess he feels you need more.”

Her eyes locked on Briec. “What I need is to be let go.”

“Why would I do that? Have you somehow fulfilled your blood debt to me without my knowledge?”

“I never asked for you to save me.”

“Most likely because of that rope choking the life from you.”

“Oh!” She stood. “I hate you. Perhaps you should go fly in the rain and lightning will strike you dead!”

Grabbing her book and ignoring her growling stomach, she turned and stormed from the cavern.

Gwenvael leaned back in his chair, his hand under his shirt so he could scratch his chest. The other hand rubbed his forehead where the fruit had made a rather unpleasant temporary dent. “So what is your obsession over this human female, brother?”

Briec frowned. “Compared to what?”

His brother had a point. No one in the dragon world ever referred to the Gwalchmai fab Gwyar kin as normal.

“She doesn’t trust me,” Briec added.

“That one trusts no one.”

So that’s what this is about. He’d wondered about Briec’s sudden interest in a human female. Now he knew. He wanted what Fearghus had. But what Fearghus had with Annwyl was special. Very, very special. “That’s different, Briec. Annwyl is…well…Annwyl. And would you start using her name.”

“Why? She’s of no consequence to me.”

More like Briec still hadn’t forgiven her for backhanding him during one of her rages. As far as Briec was concerned—the most powerful human queen known to this world in the last ten thousand years didn’t exist for him.

“But you still want what Fearghus has.”

Briec looked up from the bowl of fruit in front of him, horror written all over his face. “Good gods! I’d rather remove my eyes than spend a minute in that woman’s bed.”

Gods, his family could be literal.

Briec shrugged and went back to his fruit. He chose two. “He does seem…”

“As much as Fearghus can be.” True. No one referred to Fearghus the Destroyer as the life of anyone’s party. Their grandfather, Ailean, still held that title. Even Gwenvael hadn’t quite managed to pass that old bastard’s excesses. Of course all that was before Ailean met their grandmother—Shalin, Tamer of Ailean. A title well earned and held until her final days.

“Look, Briec, if you want anything close to what Fearghus has, you’ll have to change some…things.”

“But she hasn’t even seen my den yet.” Briec grabbed a hunk of cheese and bread. “She might like it.”

Gwenvael struggled not to slap his older brother in the back of the head. Although he and Briec were close—no matter how much they fought—he still found him frustrating. Mostly because his arrogance could fill up an entire city.

“I meant you’ll need to change some things about you.”

“Me? Change? For her?” Now Briec leaned back in his chair, arms crossed over his chest. “Why would I change for a human? Any human?”

“If you want to be between her legs without her crying and praying for death, you better change.”

“What am I doing wrong?”

“Telling her she belongs to you when you haven’t even bed her yet is always a bad idea.”

“Why? She does belong to me by dragon law.”

Silently, Gwenvael sighed. This would take longer than he thought. Briec could be so stubborn. Almost as bad as their father.

“Dragon law only works, brother, if you want her as your slave. If that’s what you want, then throw our laws in her face at every opportunity. But if you ever hope to have her bed you willingly the way Annwyl does Fearghus—and from what I’ve been able to figure out, she drains his cock dry—then I suggest you take another tack.”

“Are you saying I have to seduce her?”

Gwenvael stared at his older brother. “What did you think? She’d be so grateful for your rescue; she’d drop to her knees to service you?”

Briec fell silent for a moment, then he answered honestly. “Yes. As a matter of fact, I was expecting that.”

Gwenvael shook his head. “It amazes me we have the same blood.”

Returning to the fruit and cheese in front of him, Briec muttered, “It amazes me I didn’t strangle you at birth. And why am I eating fruit? Where’s that horse?”