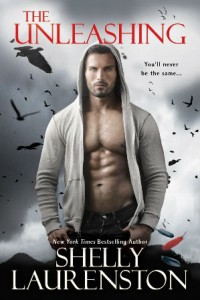 Kera didn’t know what had happened. One second she was standing in front of the bedroom mirror, her T-shirt tossed on the bed, trying to check her naked back for lumps and pus and whatever else that idiot redhead had warned her about, and the next . . .

Well, he’d just walked in, hadn’t he? And they’d both been shocked. Kera staring at Vig and Vig staring at Kera’s tits. It was like he’d been mesmerized.

The whole thing had surprised her so much that Kera had gasped and tried to cover her breasts with her arms. At the same moment, she’d felt a searing pain in her back, blood flew, and suddenly—she was flying. Backward. And out the bedroom window.

Having no idea how to make those wings work, Kera just fell like a rock, her arms swinging out wildly, her legs kicking. Then big arms wrapped around her and she was pulled into Vig’s chest. He’d turned them both in midair so that he was on the bottom . . . and bam! They hit the ground hard.

The whole thing felt like it took hours to happen, so Kera was able to remember every detail. But nope. All this mayhem in about twenty seconds, if that.

Kera planted her elbows on Vig’s massive chest and pushed herself up enough so that she could look down at his face.

It took a few seconds but then he said, “I’m okay.”

“You can’t keep saving my life,” she told him. “It leads to an unbalanced relationship.”

“I didn’t save your life.” He took a breath, finally able to breathe a little easier. “You would have survived the fall. But you might have been paralyzed from the neck down, which I was pretty sure you didn’t want.”

“At least your wings are out,” he said.

They were big and long, stretching out from her back. The feathers seemed to be a mix of black, blues, and purples, the morning sun glistening off an unsettling amount of wetness. Blood, maybe?

“They look good on you.”

Kera finally turned her gaze away from the wonder of her wings and focused on Tessa and the other Crows surrounding her and Vig.

“I think so,” Kera replied. “But Vig is bleeding.”

“So are you,” Annalisa noted.

“On your back. It looks like the glass from the window cut you.”

“I can take care of that inside,” Tessa said, leaning over to get a look.

Kera shook her head. “I don’t know what happened.”

“I do,” Vig growled, his gaze suddenly focusing on Erin Amsel.

“What are you talking about?” Kera asked.

“She tricked me. Told me you were having some kind of PTSD breakdown just to get me here. And when she sent me up to your room, she told me not to knock. Just walk in.”

Amsel shrugged her shoulders. “I had to get your wings out somehow. This seemed like the easiest way.”

Kera felt anger well up in her. An anger she hadn’t felt in years, not since she’d joined the Marines and didn’t have to live with her mother one more second. The difference here, though, was that she’d always controlled that early anger because her mother was unstable. To react to anything her mother did with anger would often prompt an even worse reaction. So Kera always buried her anger.

But now, here, with these women . . . she didn’t feel the need to do that anymore.

“Kera?” She heard Vig, but she couldn’t respond to him. Her focus was on Amsel and Amsel only.

“What the fuck is wrong with you?” Kera growled as she pushed herself off Vig and to her feet.

“Look, don’t make this into a big deal,” Amsel said, her attitude one of annoyance. As if Kera was just being a drama queen about it all. “Because it’s really not.”

“Don’t make a big deal out of it? You could have gotten one or both of us killed.”

“Ravens are notoriously hard to kill and it wasn’t that big of a drop. You would have survived. Besides, it worked, didn’t it?”

“Me? You’re the one who’s here five minutes and thinks she can just take over!”

“What are you talking about?”

“Asking about our schedules. Trying to organize us into neat little Marine-like teams. Bringing around those stupid clipboards.”

“What is your problem with my clipboards?” Kera yelled.

“I know you miss the boring, organized existence of being in the U.S. military. But those days are over. Just fucking deal with it!”

That’s when Kera just sort of . . . snapped. She stepped over Vig’s prone body, grabbed one of the nearby outdoor chairs, and slammed it directly into Amsel’s side, knocking the redhead to the ground.

Bleeding from her face and some cuts on her left arm, Amsel pushed herself up to a sitting position. She pressed the back of her hand against the side of her nose and winced. “You’re definitely getting there.”

Then the crazy bitch kicked Kera right in the crotch and all Kera could do was drop to her knees from the pain.

With Kera’s dog barking incessantly and circling the fighting pair but not intervening, Vig scrambled to his feet. He was about to step in since no one else would, but Tessa grabbed his arm before he could move.

The Viking way applied even to the Crows. You just didn’t intervene in this sort of thing. Logically, he knew that.

Gripping Kera by the hair, Erin pulled back her fist and punched her in the face, twice. Kera responded by slamming Erin in the gut.

Erin grunted, stumbling back from Kera, her arms around her stomach.

Kera stood, wiping the blood from her nose, before charging Erin, ramming into her, and dropping them both to the ground.

Using her leg, Erin flipped Kera up and over. Erin went with her, using her knees to pin Kera’s forearms to the ground. Then Erin leaned in and spit right in Kera’s face.

That’s when Kera lost it.

Using her entire body and her newly developed strength, Kera rolled over with a roar until she was on top of Erin. She grabbed Erin by the hair, dragging her to her knees as Kera stood.

First Kera rammed her own knee into Erin’s face, more than once. Then she threw her to the ground and kicked her. When Erin was facedown, trying to crawl away, Kera picked her up by her T-shirt and flung her about ten feet away.

Cracking her neck, Kera began to walk toward Erin, watching the smaller redhead, covered in blood and developing bruises, pull herself up until she stood.

Erin lifted her left hand, clenching the fingers until the knuckles cracked.

Tessa pushed him forward. “You better get in there.” Then Tessa and the other Crows ran. Away.

Vig knew why, too. Almost every Crow had an extra gift. Some more dangerous than others. Like Erin’s gift.

And Vig only had seconds to move.