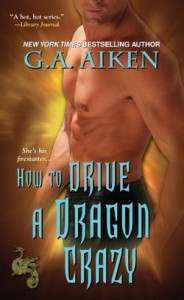 HOW TO DRIVE A DRAGON CRAZY

She walked inside and found a human and dressed Éibhear making tea, and her sister sitting on her bed—staring.

To be honest, Izzy had expected tears. Sobbing. That’s what her sister usually did after this sort of thing. She sobbed. Hysterically. Sobbed until she practically passed out from exhaustion. But not this time. This time she simply sat and stared.

When Izzy came through the door, Éibhear looked at her over his shoulder and frowned, gave a short head shake.

She went and sat beside Rhi, patted her sister’s knee. “Everyone’s fine. You haven’t hurt anyone.” Odda, of course, didn’t count because their grandmother had killed her.

“There’s nothing to say.”

“It’s me, Rhi. I know you. There’s something you want to say so just—”

“I’m going to kill everyone!”

Startled at the yelling and the statement, Izzy pulled her hand back from her sister. “What?”

“Don’t you see?” Rhi stood, began pacing. “That’s where I’m headed. I’m going to end up killing everyone I love or, even worse, betraying them.”

“Why would you think such a thing?”

“Because I’m a font of pure, unbridled evil! How can you not see that?”

Izzy stood. “Who told you that?”

Rhi huffed at that. “No one has to tell me anything,” she said defensively, which made Izzy think that someone had said something to her. “I just know. I feel it inside me, waiting to be unleashed by my uncontrollable rage!”

Izzy glanced over at Éibhear, but all he could do was shrug. He was as confused as she was.

“Nothing. No one ever says anything to me. I’m sure it’s because they’ve resigned themselves to their fate and they’re merely waiting for death to come to them all.”

Izzy rubbed her eyes with her fists, then asked again, “What?”

Talaith carefully placed a piece of ice on the bridge of Annwyl’s nose where the swelling was the worst.

“How does that feel?”

Annwyl shrugged at her question and Talaith crouched next to Annwyl’s chair, placing her hand on her friend’s arm. “Don’t worry. We’ll figure this all out.”

Her friend looked at her, one eye black and a bruise on her cheek. “Do you really believe that?”

Through the Great Hall gates, Briec, Fearghus, and Gwenvael stalked in. They’d been off at Devenallt Mountain with their father when everything had gotten out of hand, but Talaith had called for Briec as soon as things had settled. She knew better than to not inform him about a problem involving just one of his “perfect, perfect daughters,” let alone both.

Briec stopped in front of Talaith and Annwyl. Sighing in exasperation, he swung his arms from his body, forcing both Fearghus and Gwenvael to stop in their tracks and lean back before they were hit with his big forearms.

“I leave you females alone for five minutes,” he accused, “and my perfect, perfect daughters end up in danger—again!”

“It wasn’t our fault,” Annwyl argued, the chunk of ice melting into a little pebble against her face.

“Then whose fault is it?”

Annwyl looked at Talaith and together they pointed across the room and said, “Dagmar.”

Startled, the Northlander glared over at them. “Did you treacherous females just throw me under the carriage?”

“Head first,” Annwyl mumbled while reaching for more ice to put on her nose.

“Why don’t we sit down and discuss this?” Éibhear offered.

“Wait, wait.” Izzy gawked at them. “Biscuits? Tea? What are you two talking about?”

Éibhear and Rhi smiled at each other before Éibhear explained, “We can’t sit around discussing pure evil without tea and biscuits, Iz. It’s just not done.”

Fearghus crouched in front of Annwyl and took the chunk of ice she had pressed to her skin. He sighed when he saw her damaged face. “Your head certainly takes more abuse than the rest of you.”

“They’re all jealous of my astounding beauty. So that’s what they try to destroy.”

Smiling, just glad she was okay, Fearghus leaned in and kissed his mate’s cheek. “Are you sure you’re all right?” he asked her low, while Briec and Talaith argued on the other side of the table and Gwenvael and Dagmar quietly plotted in the far corner of the room.

“I’m fine. Feel a bit foolish, though. I learned long ago never go straight for a Kyvich. I should have snuck up on the twat. “

”I thought you were just going on a picnic,” he reminded his mate.

Annwyl looked off and instead of replying to his statement, she said, “She admires them, you know. Wants to be them.”

“I honestly don’t think Talwyn admires or wants to be like anyone. Our daughter is uniquely horrifying. . . . That’s why I love her.”

“It’s knowledge our girl craves, Annwyl. She uses the Kyvich as she uses everyone else she thinks can teach her something.”

“They want her for one of their own, Fearghus. And they’re not going to let me stand in their way.”

“They’ll never have her, luv. Not really. Not like they think they will. Talwyn’s soul belongs only to her. I thought you knew that.”

“But I can’t even have a bloody picnic with my own children because of these twats!”

“You didn’t think we’d hold on to Talwyn and Talan forever, did you?”

“Why not? Lots of royals’ kids live with their parents until someone dies.”

Fearghus chuckled. “Someone dies because someone sometimes poisons all those in the way of their inheritance. But for dragons—and our offspring are half dragon—living with parents for any length of time is simply not an option.”

“Because they irritate the living shit out of us and it’s the only way to ensure we don’t kill them while they sleep.”

Annwyl leaned forward a bit to see who spoke to her. It was Brastias . . . and he wasn’t alone. Behind him were two dragons in capes. Fearghus recognized the smell of flame if not the scent of the dragons themselves.

“Someone here to see you.”

The tallest of the pair stepped forward and pulled back the hood of his cloak. “Hello, Annwyl.”

Just one look at the steel-colored hair that fell forward had Fearghus standing, but, after a second, he recognized the face. He especially recognized the black eye patch. The Rebel King of the Quintilian Provinces.

Considering Annwyl had traveled and fought at the side of King Gaius Domitus long before Fearghus had, he’d expected her to remember the dragon. Then again, perhaps he should have known better. . . .

The Iron blinked, glanced at Fearghus. “It’s me. Gaius.”

“The west of where?”

At this point, Gwenvael was laughing hysterically, Briec could only shake his head, and Dagmar was rushing across the room to properly greet a powerful monarch.

Pretense gone, the king folded his arms over his chest and snapped, “Good gods, woman! Did that wolf you kept talking about lick the sense from your thick head?”

“Wait. I’m sorry. What was that about a wolf? And what was it licking?”

Annwyl swiped her hand through the air. “It isn’t what you think, Gwenvael.”

“I can think many things, so you really do need to clarify.”

“The god who helped me was a wolf, and he liked to lick my forehead.” Annwyl shrugged. “It helped me focus.”

“Wolf god?” Talaith asked. “The god who helped you was Nannulf?”

Annwyl sighed. “I guess.” She focused on the Iron. “So you’re Gaius, right? Yes. Now I remember. The Rebel King and all that.”

“Right. The Rebel King. You rescued my sister, Agrippina,” Gaius said with a sweeping gesture to the female standing behind him, “fought by my side in battle and together our armies destroyed Overlord Thracius. That Rebel King.”

“Yeah, yeah. I remember.” She studied him for a long moment before asking, “Were you always missing that eye?”

“Annwyl!” Dagmar barked, her small body now standing in front of the Iron as if trying to protect him.

“It’s a fair question! I mean, did I take it myself? Because that could be awkward!”

“I had a lot going on then,” Annwyl admitted. “I was killing and dismembering people all over the place. Your eye could have definitely been a casualty.” She smiled. “Glad to know it wasn’t me, though.”

“And my piece of ass!” Gwenvael announced from the other end of the table while he dropped into one of the chairs. “So keep your grubby Sovereign claws off her.”

“—and,” Dagmar continued desperately, “I’d like to welcome you and your companions to Garbhán Isle. If you don’t mind staying human, there are rooms here, but we do have some lovely caves—”

“Rooms are fine,” the Iron cut in, his glower still on Annwyl. “But we really came here to meet with Bram the Merciful.”

“Izzy,” Brastias cut in, “said she’d make sure to have him sent here.”

“Excellent. Thank you, Brastias. While you’re waiting, my lord,” Dagmar offered, “why not take a few minutes to freshen up after your long journey in one of the available guest rooms? We can have some food sent up or you can eat down here—and who let this disgusting animal in the house?”

Izzy’s dog immediately sat, slobber-filled tongue hanging out of his mouth as he gazed up at her.

“Izzy left him to watch out for our visitors while she handled some other . . . things,” Brastias explained.

“Not sure Izzy will like that last one, but I’ll see what I can do.” Brastias grabbed a piece of bread from the table and swiped it by the dog’s nose. “Come on, boy.”

Since the dog would and did eat anything, he immediately followed.

Dagmar let out a breath and again focused her attention on the royals. “Now . . . where was I?”

“You were welcoming us to Garbhán Isle.”