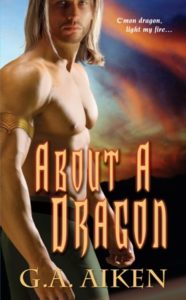 Briec the Mighty, second oldest in the House of Gwalchmai fab Gwyar, second in line to the throne of the White Dragon Queen, Shield Hero of the Dragon Wars, Lord Defender of the Dragon Queen’s Throne and, as far as he was concerned, the only sane one of his kin, headed to a nice, quiet spot. Some place by water would be nice. It would be at least two days before he made it back to his den, but he wanted to take a good look at his prize. Preferably without the puffiness that comes with being hung from a noose.

True, his sister awaited the information he had about Lord Hamish, which wasn’t much. But when he decided to stay in the village, he passed the minute bit of information on to one of the Garbhán Isle soldiers waiting outside Madron lands. As it was, Briec couldn’t believe he’d run an “errand”. For his brother’s bitch, no less. She’d actually sent him to find out if Hamish was preparing to make a move on Garbhán Isle. From what Briec could tell, Hamish wasn’t planning anything. Still, he was Briec the Mighty sent to do this menial task. Really he should have killed the woman when he had the chance. But his brother Fearghus seemed so fond of her. Although for the life of him he couldn’t understand why.

Scarred and insane that one, and Briec would rather spend his long years with a nest of vipers.

Yet, he’d never seen his brother so…well…happy. The crazy cow made him smile. Cranky, unfriendly, “kill you as soon as look at you” Fearghus the Destroyer smiling. It confused Briec.

Briec himself wasn’t unhappy. But he wasn’t that happy either. And lately he’d been wondering how one achieved that level of happiness. He wondered if it had to do with Fearghus’ human female and if the same would work for him.

When he saw his dark beauty in the village, Briec thought, Why the hell not?

He’d returned to the village early that morning to sniff her out, destroy her husband if he interfered and take her home with him. But Briec never expected to find the entire town trying to execute her while turning the event into a family gathering.

And they called dragons “monsters”.

Besides, he’d reminded himself at the time, if you rescue her she’ll be grateful. According to his younger brother Gwenvael there was nothing more accommodating than a grateful human female.

Briec looked down, the two suns glinting off a large lake catching his eye. A perfect place for taking a little break and getting to know his new human.

They landed by the water’s edge and Briec immediately released her from his tail. As he expected, she pulled herself into a tight ball. Her eyes tightly closed, her entire body shaking. Dragonfear. No, Briec didn’t understand it, but he respected it. Dragons were awesome beings, so humans should quake in fear. At least for a little while.

Briec yawned and glanced around the dark bit of forest he discovered. It was nice. Shame a cave wasn’t nearby. Although he hated the thought of moving. After two hundred and sixty two years, he’d collected quite a lot of treasure. Besides, he liked his den.

As he was wondering how long before the dragonfear might take to wear off, Briec saw movement out of the corner of his eye. Turning his head slowly, he watched the human, her hands still bound but hurriedly pushing her fingers between the noose and her throat, scrambling up to her feet. As she moved toward the trees, Briec whipped his tail out, slamming the tip into the ground right in front of her. She reared back and fell on her adorable ass.

Talaith stared at the silver spike planted in front of her. That silver spike a mere tip to the longest tail she’d ever seen. Slowly, she looked over her shoulder at the dragon.

By the gods—he’s huge! She felt the panic again. The dragonfear. One of the most unpleasant feelings she’d ever experienced. It dug deep into her gut and spread out, immobilizing her limbs, her ability to speak and think. All she wanted to do was scream and cry and beg for eternal darkness so she didn’t have to look at it anymore.

“Take deep slow breaths,” it told her. “It will calm you.”

Calm her? Slow breaths? Instead she sucked in a breath to tell it to go to hell, but ended up sending her late-night snack spewing across the dragon’s foot.

Talaith’s eyes narrowed and suddenly she found her voice. “And yet, I feel remarkably better,” she sneered.

Ah, and look…she’d found her stupidity, too. You’re mouthing off to a dragon, Talaith. Well, she never could curb her tongue.

Although, she wasn’t lying. She actually did feel better. Perhaps getting sick relieved the tension the dragonfear caused. She didn’t know, but when the dragon’s violet eyes settled on her, she was grateful she hadn’t had a big snack the night before.

“Hhhmm. A sense of humor.” He cocked his head to the side. “That actually might annoy me.”

She frowned, ignoring the teasing sound to that oh-so-low voice and, with heavy sarcasm answered, “Oh, well, that’ll keep me up nights.”

Had she lost her mind? What was she doing? Her husband always said she had the most vicious tongue he’d ever come across. But she couldn’t help herself. Some days it was her only defense.

“Seems the dragonfear is wearing off, little human.”

“So it would seem, enormous dragon.” She cringed when he showed rows and rows of large fangs. Good gods is that his smile?

“Well, we can’t stand here all day marinating in your sick.”

Sitting back on her heels, her stomach finally settling, she said, “Sorry. Does the smell ruin a good meal for you?”

The dragon’s tail wrapped around her waist, lifting her off the ground. “So perhaps we should get you clean then, eh?” Then the bastard flung her into the lake.

She screamed until she hit the water and went under. Forcing herself not to panic or drink too much of the lake, Talaith kicked her legs hard trying to get back to the surface. As she broke through, she saw the dragon glide into the water, his head and body disappearing from her sight.

He was coming to eat her! Her lust for survival swept through her, knocking out any fear, and she turned and did her best to swim to the other side with her hands still bound.

She knew she didn’t have a chance, though, and wasn’t surprised when he grabbed hold of her waist. That’s when she started fighting, kicking and thrashing. He would still make her his morning meal, but she’d make sure she didn’t go down easy.

“I said calm down!” He yanked her to him and Talaith immediately froze. That did not feel like any dragon.

She looked down and saw an arm wrapped around her waist. Although it was the biggest arm she’d ever seen in her entire existence, it was still not the forearm of a dragon. It was human.

Terrified of what she’d find holding her, Talaith turned her head and peered behind her.

Talaith took a deep breath as she stared at her beautiful knight. “As a matter of fact…no. I’m not.” Then she growled, “So get your bloody hands off me.”

That did it. She couldn’t take anymore. Not another second. This was all simply too much for one woman to take. With a feral snarl she swung her bound hands at his face. He roared in anger, but released her to cover his right eye. She took her chance and swam toward the shore. She’d just dragged herself out of the water when he came charging up behind her.

Talaith got as far as the line of trees before she felt his hands, still human thankfully, on her. They grabbed hold and yanked her back. She slid, hitting the ground, her knees scraping across rocky dirt. She tried to pull away again, but his firm hold merely tightened, then he flipped her over. She tried kicking him, but he pinned her down with his own body. As human, the man was simply enormous.

He grabbed her bound wrists and pushed them above her head, keeping her in place.

“Not in this lifetime!”

He gave a short roar and Talaith froze. She closed her eyes, the dragonfear making a sudden and rather unpleasant return. Yet it didn’t last this time. Going as quickly as it came.

Once gone, she opened her eyes and looked at the dragon hovering over her in human form.

Oh, he’s absolutely perfect. Talaith blinked. Nice one, Talaith. Any other frightening thoughts about the dragon’s perfect body before he has you for dinner?

Yet she simply couldn’t help herself. He truly was perfect. His long silver hair framed a ruggedly sculpted face. A hard, square jaw with high cheekbones and a long nose that had clearly been broken before. He had a full bottom lip she could see herself spending hours sucking on and matched with his thinner top lip, she knew with all her heart it would feel absolutely wonderful having him kiss every inch of her. Add in those nothing-but-trouble violet eyes and Talaith felt herself slipping into a very dangerous place.

She fought for control. “Let me go!”

He stared down at her for several moments. Then he took his free hand and felt the not-even-swelling right side of his face, by his eye. “You hurt me.”

“Are you supposed to hurt the one who saves your life?”

She rolled her eyes. Am I actually having this conversation? “Probably not.” He raised one dark silver brow in question and she growled in annoyance. “You can’t be serious.”

She glared at him, but said nothing.

Dammit. If she didn’t say anything, he’d keep her like this for ages. And having this fiend so close to her barely clothed body was making her extremely uncomfortable. Finally, she spit out, “I’m sorry if I hurt you.”

“That was…better. I suppose. And yet—”

He settled down against her and that was when Talaith realized he’d placed himself between her legs. The only thing between them at the moment was her very thin and worn nightdress.

“I don’t feel you really mean it.”

“You say the words, but you don’t mean the words.”

“Really? Well I mean these…get the bloody hell off me!”