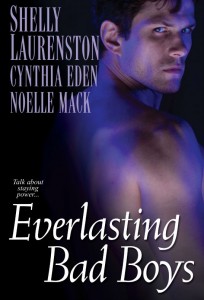 Ailean didn’t know what woke him up first. The two suns shining in his eyes—or the paw repeatedly slapping at his head.

Yawning, he glared at the little monster trying to claw him to death. “Oh, now you’re feeling fine, aren’t you?”

He yipped in answer and that’s when Shalin murmured in her sleep.

That’s also when Ailean realized Shalin was asleep on his chest.

Slightly terrified, Ailean desperately tried to remember if they’d done anything the night before. He didn’t think so and, when he looked down at her, she still wore the red gown from yesterday and the fur covering he’d brought with him still lay between them.

He let out a breath, but still didn’t know what had come over him. He may not have touched her, but all the things they’d discussed…

Ailean never talked about his father with anyone but his brothers and those two never mentioned the old dragon unless necessary. Ailean definitely never discussed his mother and what happened that awful day. His own kin knew never to mention it. Nearly a century ago, one cousin drunkenly brought it up after a family hunting party and lost both his horns when Ailean snapped them off.

The puppy yipped again and Shalin’s head snapped up from his chest. “Wha—where—?”

“You’re safe, Shalin,” he told her, seeing the confusion and panic on her face. When she looked at him, her panic seemed to pass and she smiled at him with real warmth.

She turned a bit to look at the puppy, but seemed more than comfortable cuddled up to his chest. “And look at you Lord Terrify Me.”

The dog yipped again and Ailean said, “You best let him out, Shalin. Or there’ll be more mess to clean up.”

“Just open the door. He’ll find the rest of the dogs.”

He thought she’d roll away from him, but instead, she moved across him to get to the edge of the bed. Ailean gritted his teeth and willed his body not to react. It had to be one of the hardest things he’d ever done and he’d gotten in a fight once with a giant octopus.

“Will he come back?”

“I’m sure. He’s bonded to you, Shalin.” And he knew how the little bastard felt. Ailean knew if he left this moment, he’d probably come back too.

“Come on then, you little terror.” Shalin picked the dog up and walked to the door. Ailean heard it open and then Shalin’s strangled, “Uh…”

“What’s wrong?” He rolled to his side, raising himself up on one elbow, and looked toward the door. “Shit,” he barely had chance to mutter before Bideven pushed past Shalin and stalked in, Arranz and the twins right behind him.

“You dirty bastard. Couldn’t keep your hands off her, could ya?”

Ailean slid off the bed and stood in front of his kin, the only thing holding up that fur covering his hand.

“I’m not quite sure what it has to do with you, brother.”

Bideven moved toward him but Shalin calmly stepped between them. “He never touched me.”

Arranz sighed. “Shalin love, could you move? You’re in the way of some lovely violence.”

Giving no more than an annoyed sniff, she didn’t respond to Arranz and instead said again, “He never touched me, Bideven.”

“I needed help with my puppy.”

Arranz and the twins started laughing and didn’t seem inclined to stop while Bideven’s accusing gaze shot daggers at Ailean.

Shalin rested her hand against Bideven’s chest. “Stop this now.”

“Shalin, you’re an innocent about this sort of thing—”

Ailean didn’t realize he’d snorted out loud until they all looked at him.

He glanced at Shalin and shrugged. “Sorry.”

“—and his intent,” Bideven finished. “We’re just trying to protect you.”

Shalin folded her arms over her chest. “Do you think so little of your own brother?”

The confusion on their faces would be something Ailean remembered for ages.

“Do you think so little of him? That he’d take advantage of me. Force me.”

“Is that truly what you expect of your own kin? I thought the Cadwaladr Clan loyal to each other.”

“I haven’t seen it. Not when you barge in here and accuse your own brother of being all manner of lizard.”

“Then you should apologize.”

Patting his shoulder, Shalin ushered Bideven and the rest out. “Now don’t you feel better?”

“Not really,” Bideven shot back, but Shalin already closed the door in his face.

Shalin held her finger to her lips while she bent over silently laughing. “He’ll hear.”

“Good!” Ailean watched her walk across the room. “How did you do that?”

She shrugged before falling back on the bed, her grin wide and happy. “Years of court life, my dear dragon.”